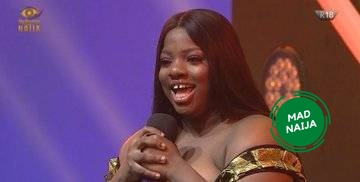 Dorathy was the first runner up in the big brother naija show that was just concluded a few moments ago. While talking with Ebuka, he reminded her of the statement she made way back in the house when thr housemates were discussing about who they liked.

Dorathy had refused to tell anyone who she liked, and she said she would only reveal the name of the guy if she was still in the house on the 71st day of the show.

As fate would have it, she became a finalist, so Ebuka threw the question to her, she laughed and tried to squirrel away from the question, she then mentioned Ebuka’s name as the guy she has a crush on, but Ebuka reminded her that he isn’t a housemate, so that was not plausible.

ALSO SEE:  Morning Guys! Do You Quickest Way To Get A Girlfriend On Facebook?

She finally caved in and mentioned Brighto’s name as the only guy she truly had feelings for in the house. Some of us were a bit disappointed by her answer, because we really expected her to own up to liking Ozo. But apparently, she never saw Ozo more than a friend or did she?

#BBNaija I Actually Like Guys Choking Me” – Nengi Tells Laycon As They Talk Outside Relationship.

I’m a Christian, I Want to Convert to Muslim Because Our Pastors Today Are Not Telling Us the Truth We Need to Know – Is It A Sin?