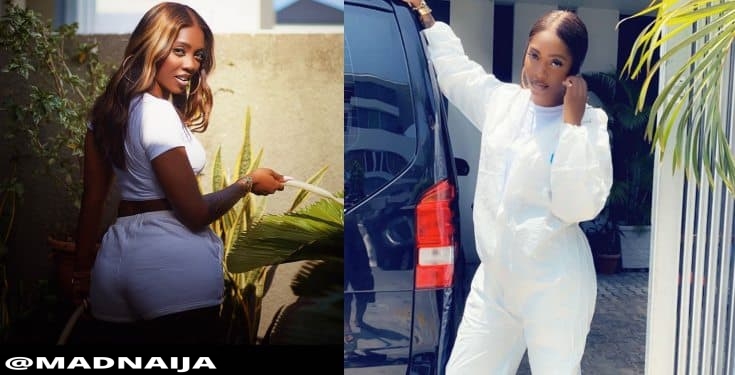 Nigerian Singer, Tiwa Savage could not bottle up her emotions as she activated her savage mood on the head of a follower who wrongly accused her of promoting rape, violence and occultism.

The altercation occurred when Tiwa complained about the recent spate of killings in Nigeria and all the chaos which have surrounded them. She had tweeted: #WeAreTired of senseless killings, lorries falling on road and killing passengers, ACs catching fire and burning houses, young girls getting raped, young boys killed by SARS no jobs for graduates, please add your own frustration because my list is long.”

Strangely a fan rather accused her of promoting rape, illicit drugs, cultism, and violence with her music. The fan wrote: She’s standing up and Tired.. Tomorrow she’II be promoting her songs, dressing indecent (Rape invitations), Showing Cults signs, colours and symbols) and promoting Drugs and Guns…All seen in previous songs by you and other Popular celebrities. Change starts with YOU.”, the follower tweeted.

At this point, Tiwa Savage got offended and shot back: “Dressing indecent = rape invitaton. MOYIN or whatever your name is, you are DISGUSTING, you are a DEVIL and I pray all my followers show you pepper. You will be made an example today.” 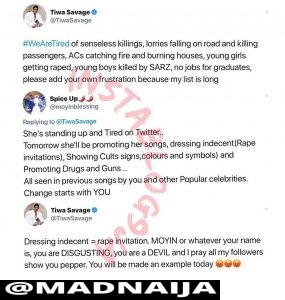