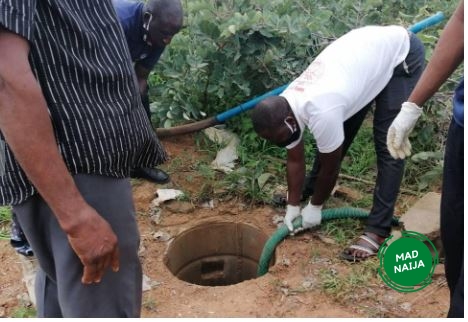 The aggrieved father narrated how his son was abducted, killed, and thrown into a well despite paying a ransom to the perpetrators.

A Nigerian man based in Kaduna state, Eguaku Anya, has shared a heartwrenching of how kidnappers abducted his 15- year -old son, Stephen, and killed him after collecting N1.5million ransom.

Anya shared the story with newsmen at the Kaduna state police command today July 22 where the suspected mastermind of his son’s abduction was paraded before newsmen.

“On the 27th of May, 2020, this boy (Sylvester) and the other person came into my house and damaged a lot of things. They took away our phones, my laptop, my daughter’s phone, and also, they abducted my son in my car and left.

My son is 15 years. My son scored 245 in JAMB, he passed WAEC and NECO, only for him to enter school. They (kidnappers) stayed for a long time before contacting us and when they collected ransom, they switched off the phone.

When they finished the money, they called back and began to demand money again. The first amount they demanded was N40 million. So as we negotiated we brought it down to N5 million and again it came to one million Naira. They collected that and said it was not enough, so we added N500, 000.

And all this while, we have been begging them to let us hear the boy’s voice but as soon as they collected money, they switched off the phone. Eventually, they demanded another N1.5 million and we agreed that we will rally round and get it for them but on the condition that we hear the boy’s voice and you release him to us, not knowing that they had killed the boy already the following day after the kidnap.

It was only God that saved me and my brother that went to give them the money. They could as well have killed or abducted us. That was when we went and alerted the anti-kidnapping unit and FCID.”

Anya said the abductors killed his son and dumped his body in a well.

“They killed him and dumped him in a well that is the most gruesome way of killing a person. Not only that he was killed but in a gruesome way.

The effect of that still attacks me whenever I think about what my son could be thinking before he was killed. It is terrible.” Anya said

ALSO SEE:  JUST IN! FG Broadcasts Dates For Resumption Of Home Flights In Lagos, Abuja, Others

Confirming the incident, the spokesperson of the state police command, ASP Muhammad Jalige, said the suspects killed their victim, dumped his body in a shallow well, and then threw in about 20 building blocks to prevent the corpse from floating.