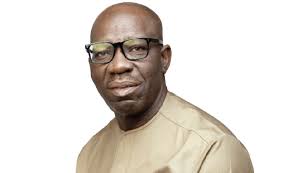 Lucky Iboi, the candidate of the Action Democratic Party (ADP), has challenged the election victory of Governor Godwin Obaseki of Edo state.

In a petition filed before the electoral tribunal in Benin, Edo capital on Monday, October 5, the ADP candidate said he was challenging the eligibility of the governor to contest the election held on Saturday, September 19.

ALSO SEE:  Popular Actress, Juliet Ibrahim Reveals, How She Was R*ped Many Times

Another ground, as contained in ADP and its candidate’s petition, is that Governor Obaseki presented a forged certificate to the Independent National Electoral Commission (INEC).

The development is coming barely 24 hours after Osagie Ize-Iyamu, All Progressives Congress (APC) candidate in the election, said he would file pre-election cases against the governor.