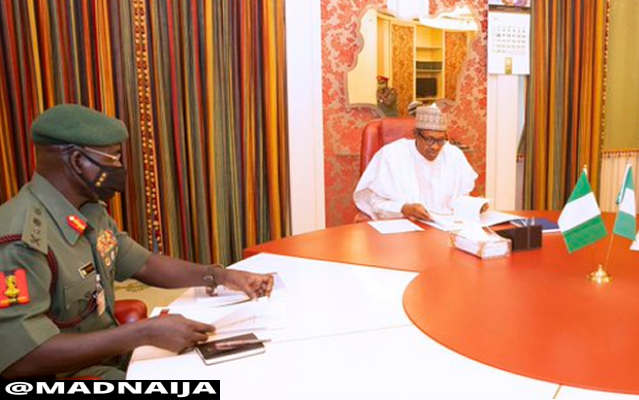 Nigeria’s Army Chief, Lt. Gen. Tukur Buratai met the President, President Buhari today met at the Presidential Villa, Abuja to give an update on the fight against Boko Haram.

The media aide for President Buhari, Bashir Ahmad in a recent tweet announced the meeting which was going on between the President and his Army Chief.

“President Muhammadu Buhari receives a briefing from the Chief of Army Staff, Lt. General Tukur Yusuf Buratai on the activities of the Nigeria Army on the security situation in the country this afternoon, at the State House, Abuja.”

After the close door meeting, the Army Chief then addressed media personnel saying;

“The troops are putting in their best and that has resulted in the tremendous successes we are recording. The fight is still ongoing and over 1,429 of this Boko Haram terrorists have been neutralised and we have arrested over 166 Boko Haram terrorists informants, their spies, couriers on logistics and their coordinators in the villages, the towns, and even the forest.

So, this is a tremendous achievement, our intelligence corps along with the Department of State Services and of course our good friends the civilian Joint Task Force CJTF, have worked very hard to see that this is achieved and I assure you that things will continue to improve as the days go by.

I came in form the North-East just a day ago and it behoves on me to brief the President on what transpired there during the two months I stayed there. I have given him details of what the troops are doing and what we have achieved as well as what we intend to achieve in the nearest future.

We will continue to deal with the situation, not only in the North-East but all other parts of the country. Tremendous success has been achieved and we are very happy with what is going on.”