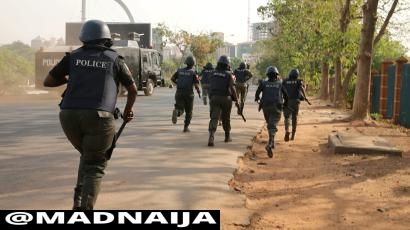 The Court said in the event that there was no space at the Nigeria Correctional Service in Okere, Warri, the accused should be remanded at the “A” Division Police Station.

The Court presided over by Ejiro.H. Diejomaoh (Mrs.) said it lacks the jurisdiction to hear the matter.

The Court said in the event that there was no space at the Nigeria Correctional Service in Okere, Warri, the accused should be remanded at the “A” Division Police Station.

The Court also adjourned the matter to July 24 for mention.

The accused was dragged before the Court over the alleged rape of a 19-year-old girl(names withheld) by the Police.

Police Prosecutor, SP Vincent Orawemen leading DSP Sunny Irabor had in a motion with charge No. NW/113C/2020 prayed the Court to remand the accused in prison custody pending the legal advice of the Delta State Attorney-General and Commissioner for Justice.

But Counsel to the accused, Mr. E.L. Umuze Esq had objected to the motion just as he prayed the Court to grant the accused bail based on its(Court) discretion.

The Warri Area Commander of the Nigeria Police, ACP Mohammed Muktar Garba hailed the position of the Court.

ACP Garba said it will serve as a lesson to others who are hiding under the cloak of Christianity saying,” Nobody is above the law.”

Human Rights Activist, Comrade Israel Joe in a chat with newsmen hailed the Court for remanding the Cleric in prison.

Joe said the Police and the family of the victim should know that rape cases are not supposed to be resolved outside the Court.

According to Joe, “They should ensure that justice is served in this case because rape and defilement is a crime against our society. The Police must also ensure that those involved face the music in line with the law.

Bishop Elijah Orhonigbe who has been taken to the Nigeria Correctional Service in Okere is the Founder/General Overseer of Victory Revival Fasting and Ministry in Warri, Delta State.