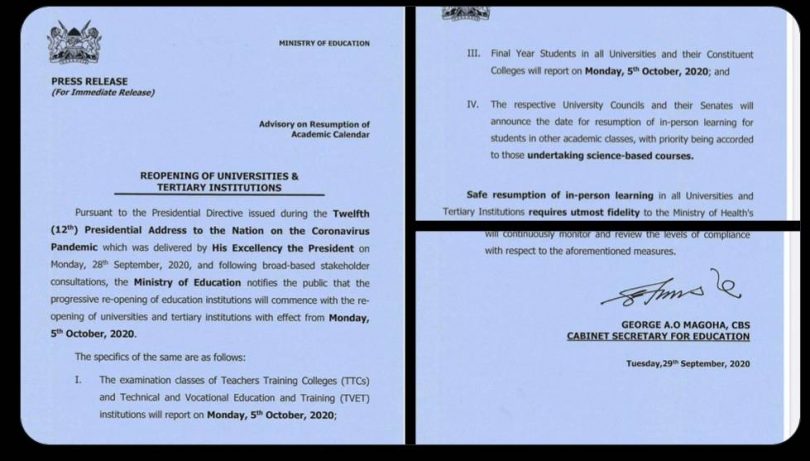 After the president’s announcement of the phased schools reopening that would start with universities and tertiary institutions on Monday 5th October, the CS Magoha and ministry of education have announced the next level if reopening. Earlier in the announcement, the ministry stated the tertiary institutions and universities should allow final year students to get back to school immediately and discuss the appropriate opening dates for the other classes.

In a memo, by the ministry of education, the next phase of reopening is Grade 4, class 8, and form 4 students that will start on Monday, 12th October. In the calendar, term two is expected to run for 11 weeks closing on 23rd December 2020.

A one week holiday will follow and third term resume as from 4th January 2021 and end on 19th March the same year. This will also be a 11-week term. KCPE will begin on 22nd March and end on 24th March. KCSE begins on 25th March and ends on 16th April.

ALSO SEE:  Top Latest Breaking News In Nigeria Today That You Must Read Brought To You By MadNaija As At Wednesday 5th August 2020

Below is a copy of the memo.