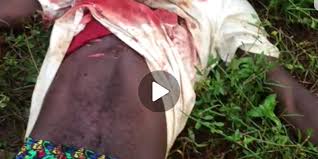 The cult war between rival gangs, Aiye and Vikings in Benin City, Edo State is yet to abate as many bodies continue to litter the streets of the ancient city.

As of this morning, dozens of bodies were seen littered in several areas in renewed cult war.

Eye witnesses account reveal that since the prison break from the two correctional facilities in the city happened in the aftermath of the #Endsars protest, the  spate of armed robberies, assassinations and killings among rival cult gangs has shot up

MUST READ! Mortuary Attendant Confesses Sleeping With Corpse.
I Caught My Husband Doing This, After 20 Years Of Our Marriage – Heartbreaking Thing
Breaking! Ogun Majek, The Popular Known Nollywood Actor Is Dead
TRENDING! What I Saw Made Me Divorce Him – Wife Lament When She Entered Husband’s Secret Room

es, some with their heads decapitated and their genitals cut off are littered around the city

ALSO SEE:  How I Beat A Church Worker Till He Passed Out For Making Snide Remarks Of My Father Who Had Stroke - Nigerian Man Narrates

As at last week, at least 30 persons were reported dead from the cult war which sources claim is an issue of supremacy between the two groups. Soldiers who were initially deployed to the troubled areas were beginning to affect the safety of residents. But things seem to have gotten out of hands with the renewed intensity of the killings.