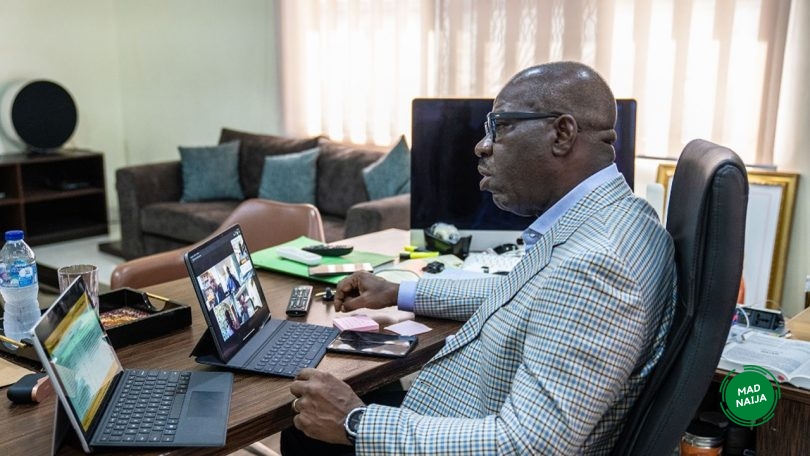 Next week, Saturday 19, the electorate of Edo state will be voting for either incumbent governor Mr. Godwin Obaseki of the PDP or Mr. Osagie Ize-Iyamu of the APC in this year’s gubernatorial election. At the end of the day when voting is over, who will win: Obaseki or his prime and pre-eminent challenger? Perhaps I should re-frame the question. At the end of voting next week’s Saturday will Godwin Obaseki remain as governor and reside in Government House at Osadebay Avenue, GRA, Benin-City for the next four years, or will his challengers in the persons of Mr. Adams Oshiomhole and Mr. Osagie Ize-Iyamu outwit, trounce and drive him out of Osadebay Avenue? Will the waves of Oshiomhole and Ize-Iyamu strong and powerful enough to drive against the Rock of God called Obaseki on Saturday, September 19, 2020? The title of what you are reading now clearly provides the answer. But am I not jumping the gun? Am I not beating the gun? To those who are reading me now for the first time or who have read me previously and several times on the subject(s) of Ize-Iyamu versus Obaseki or of Oshiomhole and Obaseki versus themselves and other pertinent matters, let me say what I am saying now with a little reminder.

Long before I became this paper’s Op-Ed columnist I had said through the voice given to me by the Supreme Spiritual Masters of Contemplation and Meditation that Godwin Obaseki would succeed Adams Oshiomhole as both tenant and land-lord of Osadebay Avenue. I averred this in 2016 as the In & Out columnist of Nigerian Tribune. This was long before Godwin Obaseki came into view and reckoning as a would-be politician who the Spiritual Masters all the way from Tibet anointed as the next governor of Edo State. I was not even in Nigeria when the voice of the ancients visited me in one of my contemplative/meditative moods. I was far-away across the Atlantic traversing the States of Massachusetts, NewJersey and Connecticut in the US of A. I can reveal here and now when I sent the relevant draft from across the Atlantic and when my “The next governor of Edo…” was published.

But does this matter when you will not find the time to locate (or re-locate) it and read and re-read it? But suffice it to state here that some persons and readers pooh-poohed me then. Then ex-governor Oshiomhole hearkened wisely to the Voice of God through the collective voice of the ancients afore-said, who collectively and confidently entered my voice – I reiterate and re-state. And other things I was not authorized to say I did not say. Now after the 2016 gubernatorial election that attractively dragged Obaseki to Edo Government House, against the one mightily holy voice of the Spiritual Masters, Ize-Iyamu went to the Edo election tribunal thence to the appeal tribunal/court and finally to the Supreme Court. He lost physically, psychologically and financially.

He, a pastor and a lawyer, disobeyed the Voice of God to obey the wishes of his heart of law and those of his then PDP people and big shots. One revelation then was that he would eventually be a governor of Edo State, but on one condition: his obedience of the authority that authorized this voice to voice what was voiced to him. The rest is one arm of a spiritual experience and lesson he did not learn from even passively because of his obeisance to an inferior obedientiary. Clearly, a lot has happened in Edo State since then. In fact, let me fast-forward. Obaseki and his erstwhile god-father and pre-eminent friend Adams Oshimhole have irreconcilably fallen apart. The Supreme Spiritual Masters of Merit saw and knew everything. Again, I had to speak to them as I was confidently enjoined to do even after obeying and maintaining the holy law of silence for a pretty long time.

Oshiomhole was pointedly told that three hundred and more Oshiomholes cannot unseat Governor Obaseki. He and his firm and un-firm supporters were told to heal their disagreement, misunderstanding and quarrel with Obaseki and both his holy and holier-than-thou supporters – although Oshiomhole and his cohorts were un-mistakably persons of holier-than-thou attitudes possessed of strong emotions and arrogance of power. In 2016 Oshiomohole in particular did not question the voice of the Spiritual Masters of Merit. In 2020 he has turned his back on them and proven to be a spiritual rebel.

He has completely forgotten or has pretended not to know or believe that Obaseki is enjoying his hey-day of political power sanctioned by the Almighty Power of God. Will Oshiomhole humiliate Obaseki on Saturday, September 19? Or will Obaseki disgrace Oshiomhole on the said date or any date INEC chooses to let the electorate cast their ballots? I recently put this question to Primate Prophet Theophilus Olabayo of the Evangelical Church of Yahweh headquartered in Mende, Maryland, Lagos. He re-confirmed what he, like the Supreme Masters of Merit, confirmed to this speaking voice long ago. No matter what the anti-Obasekis do or do not do, or say or do not say, the Edo State governor will not be humiliated after all said and done. The Supreme Masters of Merit have confidently re-confirmed this to me-again. This is not politics. This is the voice of the Holy Voice. Pooh-pooh me and laugh me to scorn as you will or as you may. Godwin Obaseki remains, stays as governor of Edo state. And know this: I DON’T KNOW Godwin Obaseki socially or physically. I only know, hear and listen to the voice that is not the voice of men. Stay cheerful as you cast your votes and remain cheerful thereafter. Now I must once again obey and maintain the law of silence. Meanwhile, join me to chant sincerely, faithfully and in one collective voice of inhabitants of holy of holies a mighty prayer of peace and victory beginning from today till… On election-day, “Godwill causes help to rise up for you out of nowhere. Your destiny will take a new turn for you and the victory is yours,” in the ALMIGHTY name of JESUS. (Read and chant Exodus14:13-14).

ALSO SEE:  Morning News: Reason Behind Edo APC leader And Why He Was killed