DELSU SUG Officials In War Of Words With NANS, Others Over Protest Against COVID-19 Fee In DELSU | MadNaija
ENTERTAINMENT| SPORTS| RELATIONSHIP | TECH | TOP-LIST 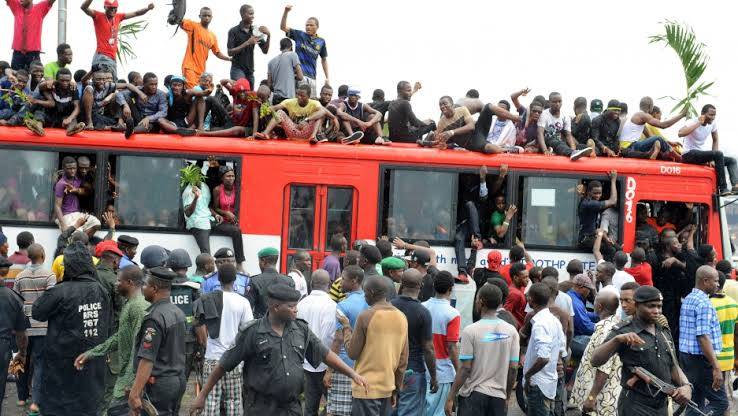 The Student Union Government (SUG) was established in every institution across the country to see to the welfare and promotion of unity amongst students and the administrative structure of the school society. The student union government officials are supposed to work together to give a voice to those they are representing and they are also saddled with the responsibility of protecting the interest of the students they lead.

However, today, Students union leaders in most tertiary institutions across the country are no longer serving the interest of the Students they are leading. Rather, greed, funds embezzlement and even fear have become a characteristic trait of most students leaders, thereby laying to bed the true essence of their existence.

The responsibility of student leaders goes beyond just the names they attached to themselves, the honorable, the comrades, the justice and every other names that are at their disposal. Student unionsism is all about dedication, transparency, accountability and honesty while carrying out your individual responsibilities.

However, today most of the student union governments across several institutions in the country have been hijacked by their school management thereby reducing the essence of a union that is supposed to serve as a pressure group on them to just an ordinary tool in the hands of school authorities. Very unfortunate. 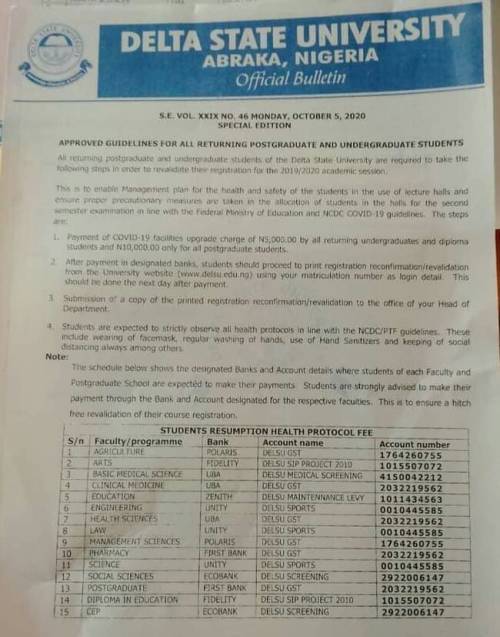 A couple of days back, several institutions in Delta State including the management of the Delta State University, Abraka (Delsu) released a memo directing all their students across all levels to make a minimum payment of #10,000 for COVID-19 testing. The development led to a great frown amongst several student union bodies like the National Assiociation of Delta State Students (NADESTU), Niger Delta University Student Union Government (NIDSUG) and even the parent body, National Association of Nigeria Students (NANS). 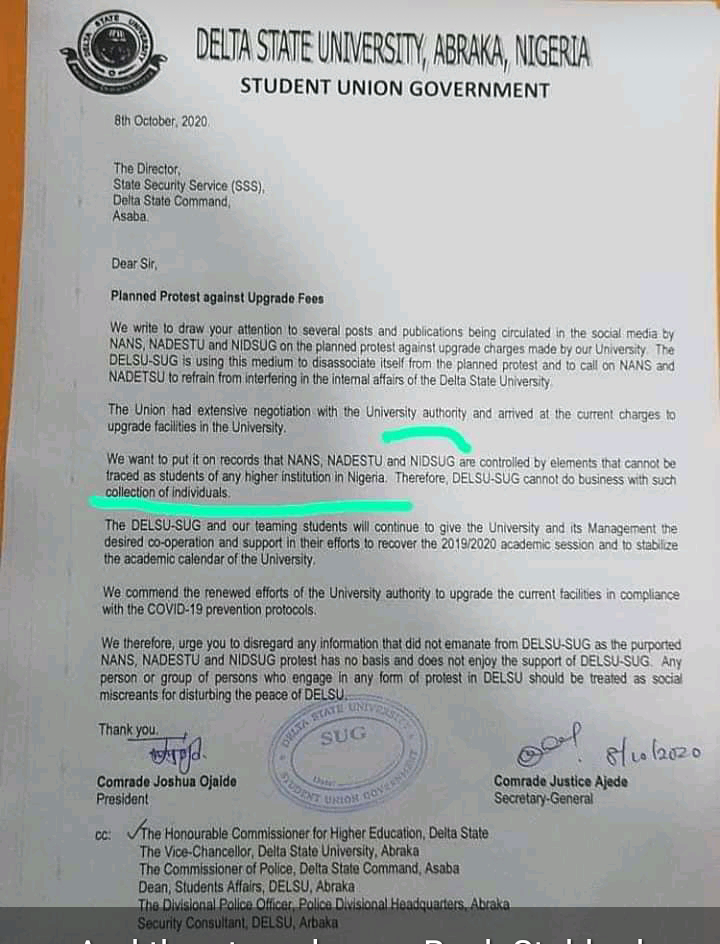 The struggle was meant for the betterment of the student community entirely but surprisingly, the leadership of the Delta State University Student Union Government (SUG) released an official memo dissociating themselves from the planned protest against the outrageous COVID-19 fee and in the process ended up insulting the leadership of NIDSUG, NADESTU and even NANS.

In paragraph three of the photo tagged item 1 above, the union government was quoted saying ” We want to put it on records that NANS, NADESTU and NIDSUG are controlled by elements that cannot be traced as students of any higher institutions in Nigeria. Therefore, DELSU-SUG cannot trade business with such collection of individuals”. 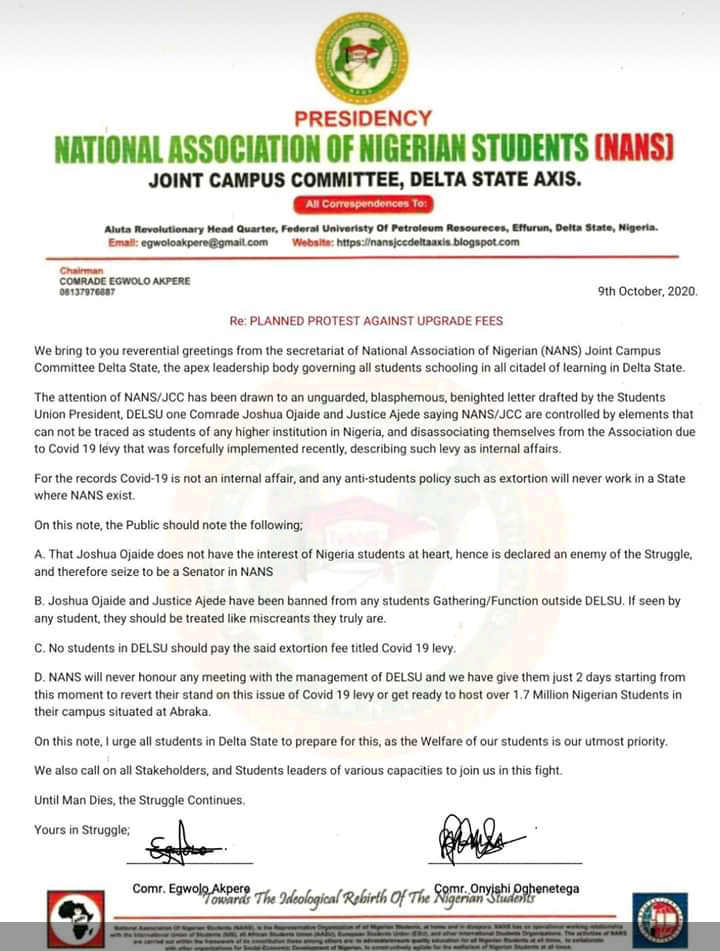 The above was a direct affront on the integrity of NANS members and what they stand to represent. Responding to the claims of the Student Union government leadership of DELSU, the leadership of NANS joint campus committee Delta state which is headed by comrade Egwolor Akpere and Comr Onyishi Oghenetega noted that COVID-19 is not an internal affairs and they would not give room for any institution in Delta State to extort their students with such claims.

ALSO SEE:  JUST IN! Building Collapses In Lagos As 2 Dead And 8 Rescued

In the memo released by the National Association of Nigeria Students (NANS), Delta State, the body called the president of DELSU SUG, Comr. Joshua Ojaide an enemy of the student struggle thereby banning him from every student function outside the Delta State University community.

Furthermore, the union noted that they will not entertain any invitation from the management of the Delta State University and are giving them just two days to withdraw their stand on the COVID-19 levy or Face the wrath of over 1.7 million students in Delta in a protest.

Thanks for reading through. I am Prechdaklins your favorite writer, Isiakpere Precious by name, a student of the Federal University of Petroleum Resources, Effurun, Delta State and I say no to any extortion in form of COVID-19 levy in our tertiary institutions and I believe you share the same thoughts with me also.