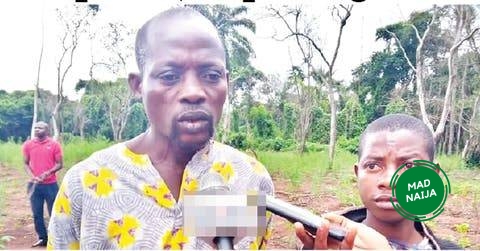 When you think of the reasons for this very man to prefer death than to watch the law destroy his Indian Hemp farm, you would know they are very touching indeed.

This 42-year old man known as Clement Akor was arrested by the Kogi State Command of the NDLEA for farming Indian Hemp.

According to the report on PUNCH, when Clement was arrested, he seriously suggested that the NDLEA should kill him instead of destroying his 10-hectare Indian hemp farm.

I was really surprised to hear that a human being would prefer death because of the Indian hemp farm. Going through his reasons for such a decision, I discovered they are touching.

One of the touching statements made by Clement was, “I’m looking for money, I am illiterate and don’t want to engage in arm robbery or kidnapping”.

Yes, some may ask, is it only by farming Indian hemp that an illiterate can make money?

But the truth remains that everyone’s thinking may not be the same; also the same thing may not work for everybody.

I’m not saying it’s right to go into farming Indian hemp, but considering the way Clement put his reasoning, he thought he was right for farming Indian hemp as long as he is not doing anything against his fellow human beings especially being into arm robbery or kidnapping.

But he failed to understand that he is also a perpetrator in Nigeria by farming Indian hemp; which later gave him the worst disappointment of his life.

This is another touching statement made by Clement, as a reason to prefer death instead of watching the law destroy his Indian hemp farm.

He said he spent a lot on the farm, and can’t afford to watch it destroyed by the NDLEA, that it’s better to be killed so that he can’t watch his hard labor being destroyed.

I said touching in the sense that I never knew that ordinary N12,000 can be so big for one to prefer death.

This describes the standard of living of Clement because if he could prefer to die because of the farm spent just N12,000; it then means that the money may be too big for him, imagine ordinary 12k.

He felt disappointed because he said he has spent a lot on the farm for it to grow, now time to harvest it, time to reap his hard work; and the law has come to destroy his hard labor.

His disappointment was really shown when he cried profusely while attempting to stop the men of the NDLEA from destroying his farm; but quite unfortunate to him, the law may not have time to look at one’s cry.

Remember I have not said that it’s right to farm Indian hemp, neither I’m I supporting Clement for farming Indian hemp.

After all farming Indian hemp is not the only way to look for money if you are illiterate; there are other many legal ways to think of money even as an illiterate.

But most times, one’s behavior may help to temper justice with mercy; most times one’s remorse may change his case in the law court and maybe the reason to be set free.

It was the remorse found in Mariam Sanda, the husband killer that drew public attention for her to be set free, even as a murderer.

So seeing how pathetic Clement behaved towards his Indian hemp farm, I suggest that the government Should take his case lightly with him. They should temper justice with mercy.

If possible, let the government look for another petty legal business for him that will be able to sustain him.

We have kept hearing about the rehabilitation of repented Boko Haram, so I guess Clement is better to be rehabilitated than the Boko Haram.

But this doesn’t mean it should be a way of promoting crime in the country, because I know if such Opinion should be considered, many people would see it as encouragement for law perpetration. No! Shouldn’t be so!

Let’s stare clear from anything we know to be illegal!

There are still other ways to do things better through legal ways!👍

Thanks for your understanding!👍

My name is Sunday Nzitechi, I’m a digital marketer, a blogger, a content creator on some platforms.