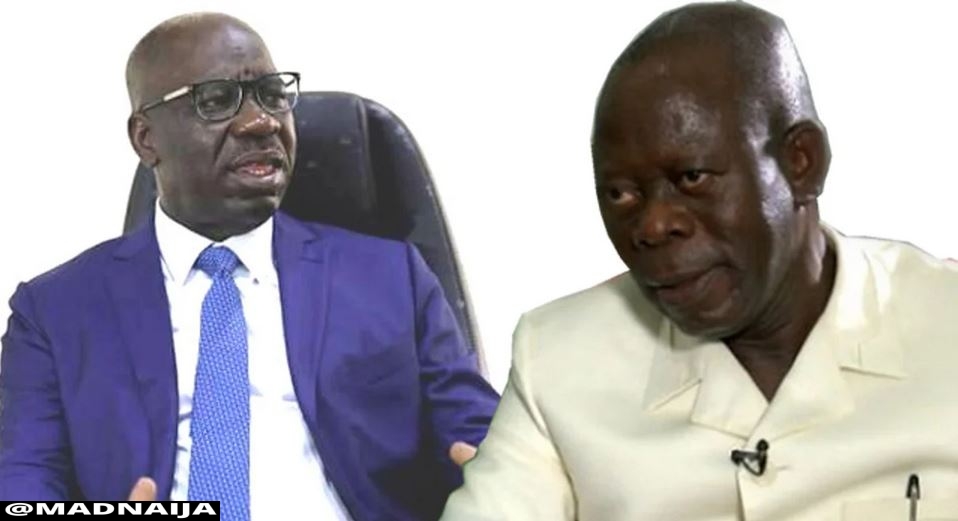 Oshiomhole and Governor Obaseki criticized each other over the first degree certificate presented by the governor from the University of Ibadan.

The National Chairman of the All Progressives Congress, Mr Adams  Oshiomhole, and the Edo State Governor, Mr Godwin Obaseki, on Tuesday criticised each other  over  the first degree certificate presented by the governor from the University of Ibadan.

Oshiomhole, in Abuja at the inauguration of the APC’s screening and appeal committees for its members contesting governorship  primary in Edo State, expressed  doubt over the authenticity of Obaseki’s UI certificate.

But the governor, through his spokesman, Crusoe Osagie, challenged  Oshiomhole to go and confirm the authenticity of his certificate at the UI. He also said the national chairman should tell Nigerians the university he attended.

The dispute, which began last year between Obaseki and his predecessor has defied efforts of the APC governors and the African richest man, Aliko Dangote, to reconcile the two politicians.

Doubting Obaseki’s UI certificate, the national chairman on Tuesday directed the screening committee to confirm it from the nation’s premier university

Oshiomhole said, “Someone should approach the UI and end this matter once and for all. If the certificate Obaseki parades is that of the UI, find out how did he pass senate screening of those days? I’m aware that in those days when this man never dreamt of becoming a governor, every student, no matter your status or your family name, must pass screening.

“It is done every third term at the UNN (University of Nigeria Nsukka), then we ran terminal not semester programme. The final screening was in the third year, before you go in for your final year.

“How comes the UI allowed him then. Did he do a remedial? which was not unlikely. These are questions. Many came in especially in education and linguistics, did remedial for one year and if the result was good, gained direct entry and graduated three years after.’’

While inaugurating the two committees, Oshiomhole said the APC had learnt bitter lessons from the sad experience it went through after winning the Bayelsa State governorship election only to lose at the Supreme Court on account of the submission of a questionable academic credential by the deputy governorship candidate.

He charged members of the two committees not to spare any effort in ensuring that they conducted due diligence on all claims contained in the documents submitted by all six aspirants seeking to contest the party’s primary.

ALSO SEE:  How My Customers Forcefully Initiated Me Into Cultism - Barber Opens Up

He stated,  “The screening is not a formality and we expect you to be very meticulous in every material in particular to protect our party so that it would not  be said that we did not learn anything from Bayelsa.  As you know sometimes when things go wrong, everybody sees it that NWC did not do a thorough job.  So, people personalized it. They say, ‘If the chairman is thorough, if he has done his job this will not happen but that is the price for leadership.”

He urged  the screening committee  to interact with all those who had aspirations to contest the Edo State governorship poll.

According to him, if anybody is dissatisfied with the screening committee’s recommendations, he or she will file an appeal and it will be forwarded to the appeal committee.

Oshiomhole stated, “The NWC can reject the screening result. Screening committee is high court. The appeal committee is the Appeal Court and the NWC, the Supreme Court.”

Members of the two panels were drawn from the academia as well as the party’s team of legal professionals.

The appeal committee has Dr Abubakar Fari as Chairman, and Daniel Bwala as Secretary. Other members of the committee are Prof. Sadeeque Abba, Gbenga Olubajo, Mohammed Idris and Esther Bepeh.

Go ahead and verify from UI, Obaseki replies Oshiomhole

But contacted by one of our correspondents, Obaseki, through his Special Adviser on Media and Communications, Osagie, said, “The University of Ibadan is perhaps the most reputable university in Africa. The University of Ibadan awarded a BA degree in Classical Studies to his excellency the governor as far back as 1979. The university is still there. If anybody feels the certificate is not credible why doesn’t the person go there to verify?

“Why are we just seeing this only in the media? Bear in mind that the Governor of Edo State, Godwin Obaseki, was among an elite corps of illustrious alumni of the university people to deliver a national alumni lecture in August 2018. Do you think such an institution will call someone who is not an alumnus to deliver such a lecture?”

ALSO SEE:  JUST IN! Late Ajimobi, Was Defrauded Of N50m After Dispatching Private Jet That Fetch Him Fake Drugs

“Describing the allegations as baseless, he said,  “We have said before, these allegations are baseless and come to think of it, which university did (Adams) Oshiomhole attend to know what the admission process is like? The responsibility of setting guidelines for admission into a university rests on the Senate of the institution. The lecturers who taught the governors are still alive and the institution is still there.”

APC, unlike Oshiomhole, believes  in rule of law – Obaseki

Obaseki also reacted to Oshiomhole’s claims that the NWC would have a final say on Obaseki and others on the certificates and other issues.

Osagie, in an interview with The PUNCH, said the governor believed in the rule of law.

He said, “Our reaction is simple. We are not like Oshiomhole who is the judge and executioner. We believe in the prevalence of the rule of law. For us, that is more important than what one individual says.

“As we have always said, Oshiomhole has not hidden the fact that he has an ‘axe to grind’ with Governor Obaseki, but our hope is in the fact that our party is a law-abiding party. Our party is one that abides by its constitution and we believe that the constitution does not put all the powers in the hands of one man. On the strength of that, we know we are going to prevail.”