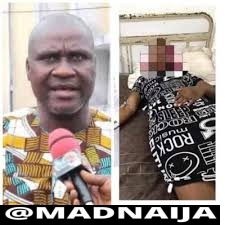 Another rape suspect has been nabbed in Delta State for raping a 19-year-old girl in his church on Wednesday 20th May. The suspect Bishop Elijah Orhonigbe, who is the Founder and General Overseer of Victory Revival Fasting and Prayer Ministry in Warri, Delta state, is said to have been and arraigned in court for the crime.

Confirming the story to newsmen while taking the suspect to court, the Commandant of the Warri Area Command, ACP Mohammed Garba, noted that the clergy has gone into hiding since committing the crime and has just been fished out and arrested on Friday 5th June.

Narrating the incidence as reported by the victim’s mother, Garba noted that the clergy had invited the victim and her mum to church for deliverance, claiming that he saw a vision of the spirit of death hovering around their family. It was during the deliverance session that he, however, allegedly drugged the victim and raped her.

Adding that the evidences collected so far has proven a case of rape against the clergy, Garba noted that the teenager has been taken to the hospital but was in coma for two days. “ She said the pastor had a dream that death is hovering in their house and for peace to reign, she should bring her daughter for prayers. And the woman took the lady to the church. I think what really happened is that the pastor drugged that lady and raped her. I personally took the lady to the hospital because she was in coma for two days. ”

We looked for this pastor for the past two weeks. Later on, I used my detectives to trace where he hid. I got him arrested and I am charging him to Court now. We have evidence to prove rape and we have established that this pastor has raped that girl. We have the pictures. We have examined her. I took her to the doctor. He has examined her private parts and we have everything to charge this man to Court “, Garba reportedly said.