Fiction: After 50 years of marriage without children, I discovered that my husband is an occultist | MadNaija
ENTERTAINMENT| SPORTS| RELATIONSHIP | TECH | TOP-LIST 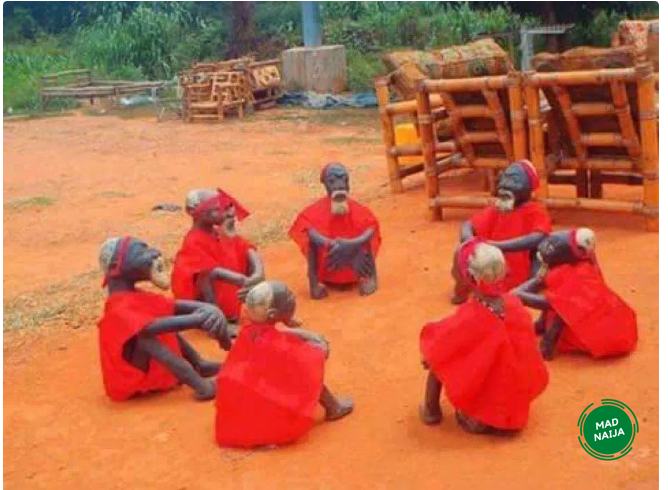 My name is Happiness, I am a native of Ihiala, in Ihiala local government of Anambra state. I am 72 years old. I want to share this story with you because I need your advice on what to do.

After 50 years of marriage without children, I discovered that my husband is an occultist man. I’m really in pain and confused right now. Please read slowly to understand my pain so that you can advise me properly.

I got married to my husband 50 years ago. I was only 22 when I met him. He was so handsome and has all the qualities I need in a man. We were into each other that we didn’t think twice before getting married.

He was so rich that the first time I entered his house, I felt like I was in paradise. The house is so big that I even lost in one of the rooms. It was funny, but yes, I was lost in the room. He found me after some minutes.

Medically, I was very careful not to allow love make me make wrong decision. We went for tests and we were declared compatible.

We got married months after. The marriage was so sweet that I can still imagine it right now. He made me believe in true love. I made me believe that there is such thing as true love and unconditional love. Let me not bore you with my love story.

After two years of marriage, no issue. His mother was worried. She started asking questions. My husband would always tell her to calm down, that we will give her a grandchild soon.

Initially, I didn’t feel it until it gets up to 8 years. I started asking myself questions. I looked back at my pasts, I didn’t play any dirty game. I was so worried even though my husband never complained. He was calm and always by my side. He always encourage me to be strong that one day, God will surprise us.

We went to the hospital but we were declared fit and healthy. What is the problem then? I asked myself. I shed tears constantly. I was regretting the marriage already.

After sixteen years, my husband’s mother died. She was buried immediately and the burial ceremony was celebrated a month after.

After her burial, I felt a little more comfort. My husband seemed comfortable with our childless condition. He never complained for once.

I wasn’t a very devoted Christian but I do go to church. After 30 years, decided to be more devoted to God. I started praying and never missed any church program.

Fast forward to this year, I met a mad man on my way to church. The mad man was waving at me to come. I felt embarrassed. How can a mad man called me? He doesn’t even know me. I ignored him and continued walking.

The next day, I met the same mad man at the same spot waving at me to come. Again, I ignored him.

On the third day, the same incidence occurred and I decided to go meet the mad man. His first statement surprised me. He said,

“You are blessed woman. You are indeed a lucky woman.” I was surprised hearing this even though I was confused. He told me that I am very lucky because if I had ignored him on that day, he wouldn’t come back again. That was really my last chance. I was thrilled.

After saying these things, he started behaving like a mad man that he is. I was completely dumbfounded. I took to my. When I got to church, all my prayers were based on the mad man’s instructions.

When I got home, I saw my husband seated in the living room like a houseboy. I approached him with a mean countenance. He looked at me with pity and sorry written all over his face.

I asked him to tell me the secret behind our childlessness just as the mad man had commanded.

ALSO SEE:  It Takes Great Courage To Approach This Beautiful And Curvy Ladies

He started by telling me how much he love me. I didn’t doubt him, even the mad man said he loves me. He then decided to tell me everything. He said,

“Honey, I am an occultist man.” I was surprised and confused at the same time. I couldn’t believe my ears. I controlled my emotions and allowed him to continue.

He said “even before I got married to you, I was already an occultist. I never knew that my occult would request me to sacrifice you.

Two months after our wedding, I was told to sacrifice you to our alter. I was told that our god want to taste your blood. I was really mad at them. I told them that I love my wife more than myself. I asked them to kill me instead of my wife.

They said that it is you that they want. I refused. They told me that I and my wife will never have children until you are sacrificed. I have been pleading with them since then, yet they haven’t said anything.

They had once decided to kill you, but unfortunately for my mother, they got her. They killed my mother.

Honey, I can’t leave them because if I do, they would wipe off my family including your family. I am old, you are old also, let us leave like this until death comes.”

That was what he said and I am very confused right now. I don’t know what to do. I feel like running away from him, but I’m afraid of getting killed by his occult. I seriously do not know what to do now. Please advise me.

Please share with your groups and friends because I need their advice. Thank you.