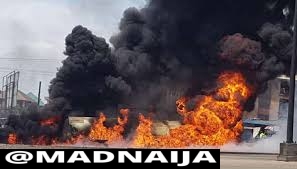 The incident was recorded at about 2.18a.m. on Kara Bridge, inward Lagos, when an articulated truck laden with 33,000 litres of petrol crashed into the other articulated vehicles which were travelling on same route.

The impact of the crash exploded into an inferno, and it lasted for hours as the articulated trucks spilled their contents on the road. Earlier, Vanguard reported that one of the tanker drivers said he was waiting for the curfew time to elapse before entering Lagos when another tanker rammed his vehicle. Although no life was lost in the incident, the three articulated trucks were consumed by the inferno. As at 2.30a.m., recovery operation was still ongoing just as the Director-General, Lagos State Emergency Management Agency, LASEMA, Dr. Oluwafemi Oke-Osanyintolu, who confirmed the incident, said the agency was on top of the situation. He said the situation will be well managed to avoid traffic gridlock on the expressway.