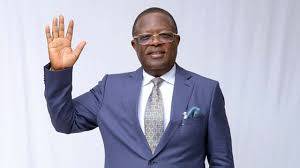 The defection of Governor Dave Umahi of Ebonyi state from the All Progressive Congress, APC to the Peoples Democratic Party, PDP has not come without the refusal of some commissioners to join the ruling party with him.

Some days ago the social media especially Facebook was awash with the rumour that a member of Umahi’s cabinet, Sunday Inyima who is the commissioner for Water Resources of Ebonyi state had resigned.

However, the commissioner has debunked the insinuations of his resignation from the governor’s cabinet.

As reported by Vanguard, the commissioner said he cannot resign on Facebook. “I cannot recollect collecting my appointment letter from Facebook or the radio station where I purportedly announced my resignation.” he said.

The commissioner added that his appointment letter was collected from the governor through the Secretary to the State Government (SSG) and that he would also follow the same process if he wanted to resign.

” I instead collected my appointment letter from the governor through the Secretary to the State Government (SSG) and will follow such channel if I intend to resign.” he stated.

ALSO SEE:  Man Drags His In-laws To Court Because Their Daughter Found A Richer Man Than Him

Inyima, a former chairman of Ohaukwu LGA of Ebonyi also declared his support for the defection of Governor Dave Umahi to the ruling APC that it signified new dawn for the state.