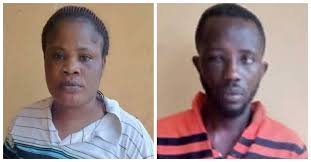 Two suspects, allegedly involved in sharing parts of the burnt bodies of policemen at Abayomi area of Ibadan, Oyo State, have been arrested by the state police command.

The arrested suspects were identified as 34-year-old Oluwakemi Ashabi Adeyemo, a pregnant mother of a two-year-old boy, and Saheed Olalekan Oyebade (43).

Two policemen, Ajibola Adegoke and Rotimi Oladele, were among the policemen killed and set ablaze in Ibadan during the #EndSARS protests by suspected hoodlums.


Police suspect
The female suspect (arrowed) at the scene of burning of policemen, as seen in a viral video recording.
Reporters At Large learnt that some of the protesting hoodlums allegedly ate the policemen’s body parts in mockery and derision, as shown on the viral video, while others allegedly cut parts of the bodies, including heads, liver, arms and feet and went away with them wrapped in handkerchiefs and nylon bags.

ALSO READ: US Election: Security Officials Reject Trump’s Fraud Claims
They were suspected to have had the intention of using the body parts for rituals.

Fortunately for the third policeman, Inspector Ojo, he was saved from being slaughtered by operatives of Operation Burst, who were reported to have put him in their vehicle and rescued him from the scene.

ALSO SEE:  Man Storms Computer Village In Anger After Getting "Paracetamol Phone" Instead Of An iPhone (VIDEO)

One of the hoodlums could be heard in a viral video recording, telling others in local language to pick the liver of of one of the dead policemen, as it would yield more money than other body parts.

Since the occurrence, one of the departments of the state police command, the Quick Intervention Unit, was said to have started gathering intelligence.

One of the suspected hoodlums, 34-year-old Oluwakemi a.k.a. Iya Oba, was discovered to have taken the scrotum and penis of one of the policemen.

She was also alleged of eating the scrotum.
Olukemi was arrested on Tuesday, November 3, as her face appeared in the viral video recorded at the scene of the burning and butchering of the murdered policemen.

When arrested, the female suspect confessed to being at the scene where the deceased policemen were burnt and dismembered, but said she was given the penis and scrotum of one of them by the second suspect, Saheed.

The female suspect said she did not eat them, but went to her residential area to show neighbours.

She claimed that she returned them to Saheed in the night of same day.

Her confession led the police operatives to arrest the man she mentioned as the one who gave her the private body parts.

ALSO READ: Fuel Subsidy: Nigeria Spends N462bn In Nine Months
When also arrested, Saheed did not deny being at the scene of the incident with other hoodlums.
But he said that Oluwakemi was the one who took the body parts herself, and only asked him for a towel handkerchief to wrap them in.

Saheed, who claimed to be a former member of a transport union (name withheld) during one of the leader’s term, said he was only there to protest with others, and did not take any body parts.

The second suspect also denied collecting the body parts from Oluwakemi, saying he didn’t know what she did with them.

Pleading for forgiveness, the pregnant mother of one said she was not a woman of such character, and must have been hypnotised, as she didn’t know what came over her to make her behave like that.

According to Oluwakemi “it was Saheed who brought the private parts to me. He told me: ‘omo mi, iwo naa lo fi mu ogi’ (my dear, you also should use these body parts to take corn meal, pap).

“Saheed got a towel handkerchief from a concrete block hole and helped me to wrap it round the private parts.

“I didn’t know what came over me that made collect the private parts. Though I knew Saheed very well, I was not very friendly with him.

ALSO SEE:  Opinion: Expect The Worst From Schools If ASSU Gets Defeated By FG, See Reasons

“I met him at the scene of protest, and he even accused me of not greeting him very well.

“I took the body parts, but he still came to my house to take them back, saying he wanted to use them.”

ALSO READ: Seyi Makinde Berates Oyo Govt Over Doctors Arears
She also confessed that she showed the private parts to neighbours in the area where she resides, before returning them to Saheed.

But she disclosed that she left her residence of her volition, and went to the scene on a motorcycle she waved down.

She also said she returned home on the same bike.

But Saheed denied being the one who gave Oluwakemi the private parts, but admitted getting a towel handkerchief that she needed to wrap them for her.

“As she took the parts away, it bugged my mind, which made me to call an in-law to inform her.

“I didn’t go to her house to collect the private parts at night as she claimed,” Saheed said.

Confirming the story, the state Police Public Relations Officer, SP Olugbenga Fadeyi said that the two suspects had been transferred to the Force Intelligence Bureau at the Nigeria Police Force headquarters in Abuja, for further investigation.