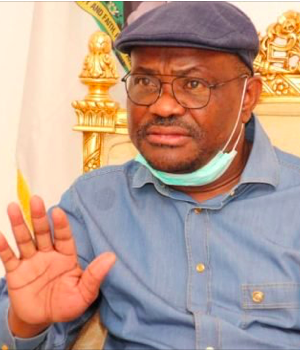 Gov. Nyesom Wike of Rivers state has challenged Rotimi Amaechi, minister of transportation, to mention his contributions to the state in his ministerial capacity.

Wike, who spoke on Monday in an interview on AIT, said he would resign immediately as governor if Amaechi, his predecessor, could mention just one achievement.

The governor threw the challenge while reacting to Amaechi’s claim that he (Amaechi) is one of the best governors the state has ever had.

Speaking on Sunday at the funeral of Adolphus Karibi-Whyte, a former justice of the supreme court, Amaechi complained of rising insecurity, bad roads and intimidation of the judiciary in the state.

“You have lost your voice. The sage (the late justice) has gone under and nobody is speaking. When I was governor, I gave people voices, but they have blocked those voices,” Amaechi had said.

Replying the minister, Wike said if the judges and judiciary have lost their voices, it is because Amaechi shut down the court for two years while he was governor.

He said he brought a lot of development to Rivers while he served as minister of state for education, but that Amaechi cannot boast of any achievement.

“Rivers people will ask you, what will you tell us. You’re doing rail to Niger Republic, which one have you done in your state? Wike asked.

ALSO SEE:  Fiction: I Found My Only Daughter Vomiting Money In Her Boyfriend's Wardrobe After She Was Missing

“As minister of education, I brought faculty of law to Port Harcourt; I brought N500 million grant to Ken Saro-Wiwa Polytechnic, I built so many schools. As a minister, I’m proud.

“You’re a minister, tell Rivers people I brought this, mention one. If you mention one, I’ll resign now. Mention what you’ve brought to Rivers people to convince them. We’re too educated for you to go to Kalamari to incite them.

“He said judges lost their voice. He’s right, why won’t they? A man who shut down the court for two years, NBA didn’t say anything. So, if he is now saying that NBA lost their voice, he’s right. Today, nobody talks about it that’s why he has the audacity to tell NBA they’ve lost their voice,” Wike said.

“You went to a supreme court justice house to tell him the president is not happy with him, why won’t judges lose their voice?

Wike also said Amaechi wasted the state’s funds on many uncompleted and abandoned projects “when there was plenty money”.

According to him, if he was in possession of those funds, “I will turn Rivers state to paradise”.

He also taunted the minister, saying he is still being bitten by mosquitoes even after he (Amaechi) spent N12 billion to fumigate the state.

“One of the things that made him the best governor, for fumigation of a state like Rivers state, we paid over N12 billion naira so that there would be no more mosquitoes. Today, mosquito is still biting me,” he said.

“He is not one of the best, he is the best. Who would have done all he did without being the best?”

Asked if his government would complete the abandoned projects, Wike said he would only complete those with economic importance, not “political projects”.

EDO DECIDES: See The Newest Word Added Into The Nigerian Dictionary of Politics.

JUST IN! President Buhari With Some Others Ministers Attends ECOWAS Virtual Summit