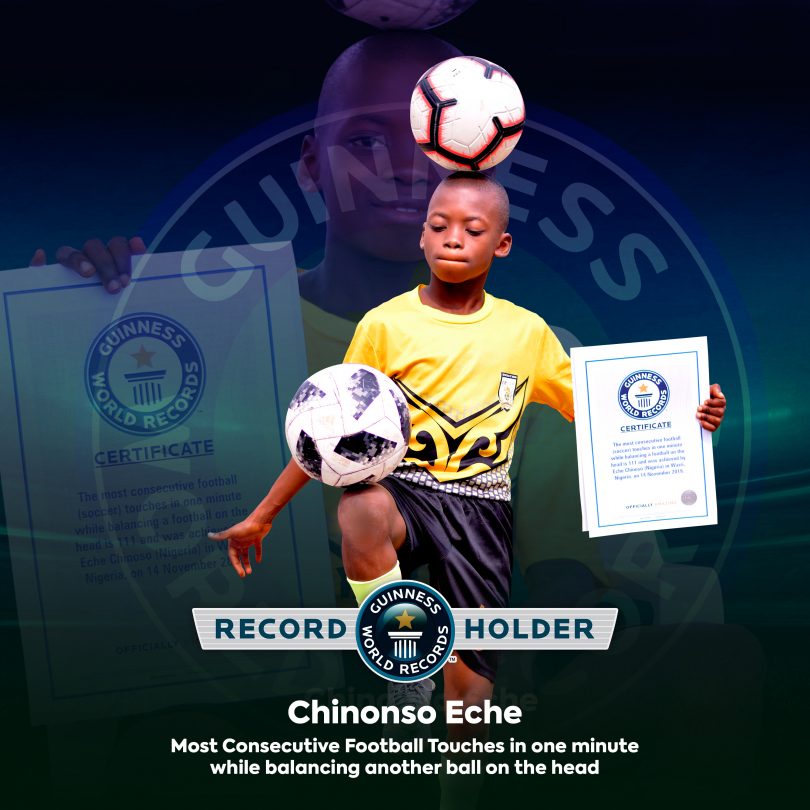 This piece to subtly draw the attention of the Anambra State Government, the Government of the Federal Republic of Nigeria notable Nigerians and amiable media outlets regarding an 11-year-old, primary six (6) Nigerian – Chinonso Eche – who has made his mark as the youngest Nigerian and African Guinness World Record holder to date. He is the 3rd child in the family of 8, an indigene of Anambra State but currently resides in Warri, Delta state. 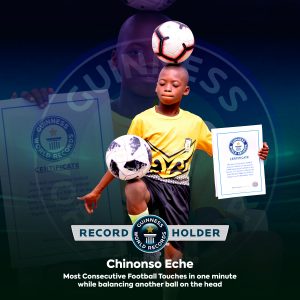 On 14th November 2019 at Warri Township Stadium, Eche attempted and broke a record for the “most consecutive football touches in one minute while balancing another ball on his head”. Eche went ahead to conveniently record one hundred and eleven touches (111), a world record which was later approved on December 12, 2019. Eche was officially awarded a Guinness World Record Certificate on January 22, 2020. The previous record was 50 touches, Eche doubled that with extra strokes added. 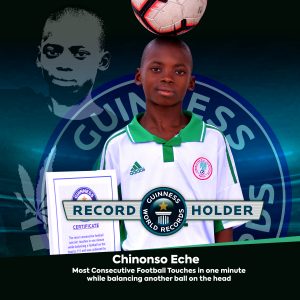 On 6th February 2020, the World Football governing body FIFA on their official Twitter page and website identified with his imperious achievement and further encouraged him to be a future start he destined to be.

It is discouraging that since the event took place on November 14, 2019, nothing has been done to recognize the multi-talented Eche who again has joined numerous and notable Nigerians to have written the country’s name in gold on the African and global spaces.

Chinonso Eche is a rising young star that needs to be encouraged and supported to further achieve his dreams in sport and also academically. We have seen his fellow younger Nigerians get massive support, the likes of Success Adegor (dem go flog flog until she tire) – the young girl who was chased out of school. Recently, there was also “the mummy calm down” boy, the young internet boxing sensation Sultan Adekoya, and the rest of others.

Eche has also brought good name to his country Nigeria, a compilation in September by the Official Guinness World Record showed he was the Only African on their 2021 edition documentary. Encouraging and supporting him will help him realize his dreams as the little boy is still struggling with his parent in Warri. He barely got the recognition a feat of such would normally attract.

Eche remains optimistic that his country has not forgotten or neglected him but waiting patiently for the right moment to be celebrated, there is no better moment than now. This a clarion call to the government and well-meaning individuals including corporate organization and importantly, the media to support this very young Nigerian talent.