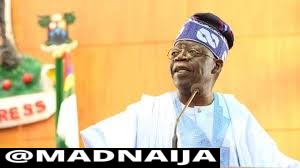 It will be recalled that on Wednesday, President Muhammadu Buhari, took a step into resolving the lingering crisis rocking the ruling All Progressives Congress, APC, following the suspension of the former National Chairman, Adams Oshiomole, where he declared his support for the Giadom as the authentic APC Acting National Chairman.

Although, the APC National Leader, Ahmed Tinubu, a perceived ally of Oshiomole, has once being in attendance at the APC NEC meeting about two years ago, the reknown politician has been excluded from the list of those that will be attending the Thursday NEC meeting.

Consequently, while giving a clarification on why Tinubu won’t be in attendance at the APC NEC meeting on Thursday, the Personal Assistant to President Buhari on news media, Bashir Ahmad, revealed that the APC National Leader, Ahmed Tinubu, was excluded from the list of those that will be attending the NEC meeting, because he was not a member.

ALSO SEE:  Cardi B Appreciates Nigerians For selection For Her At cyberspace category Of 2020 Awards

Bashir Ahmad, made this known in a Tweet on Wednesday, and said:

‘There are some people who need to know that the National Leader of the APC, Asiwaju Bola Tinubu is not a member of the National Executive Committee (NEC) of the Party, hence, he doesn’t attend the NEC Meetings. This is very clear !”

The NEC meeting is the strongest arm of the party, with his decisions surperceeding any other decisions made within the party.

However, the Senator Abiola Ajimobi-led National Working Committee of the All Progressives Congress has rejected the invitation extended to its members to attend the National Executive Committee meeting convened by Victor Giadom, because they believed that the President was wrongly advised and blackmailed into agreeing to lend his weight to illegality.

Do you think Tinubu’s outright exclusion from the APC NEC meeting, may affect the politician political career and ambition ?