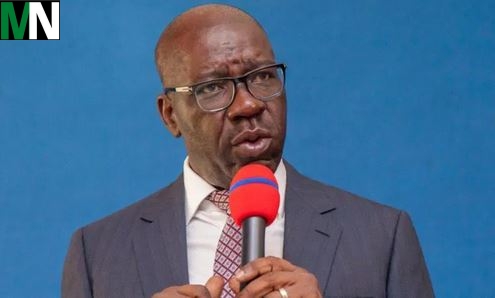 JUST IN! I’m impossible To Stop,I Will Rule For Another 4 Years – Obaseki Declares

He described his emergence as the party’s standard-bearer in the September 19 governorship election in the state as triumph over retrogressive forces.

Governor Godwin Obaseki of Edo State has boasted that he would be governor again for another four years.

The Governor made the boast Friday morning, while making his acceptance remarks, after being declared winner of the People’s Democratic Party’s primary election held at the mainbowl of Samuel Ogbemudia Stadium in Benin.

The election which commenced at about 4 pm Thursday, was concluded at about 1 am Friday.

He described his emergence as the party’s standard-bearer in the September 19 governorship election in the state as triumph over retrogressive forces that have determined to hijack the state for their own selfish endeavour.

“Today, history is being made in Nigeria, because the victory we are celebrating today has been a long and strenuous walk, strenuous walk to political freedom which has culminated in my election as a flag-bearer of our great party. By the grace of God, I will be governor again for another four years.

“I wholeheartedly accept this responsibility, which has been entrusted on me by the representatives of our great party, and this responsibility will enable me to consolidate on our achievements till date, it will help me to deepen good governance in Edo State and it will help us to restore the pride of Edo people, and make the state one of the best state to live and do business in Nigeria.

“Today marks a defining moment in the political history of our State and indeed our country. Our story is one of courage in the face of protracted crisis and ultimately, a triumph over retrogressive forces that have determined to hijack our state for their own selfish endeavour.

“With today’s election, we have demonstrated again that no mountain is too high to stop the aspirations of our people that have put their faith in God, and in one accord, to make life better for the greatest numbers of our people,” he said.

The Governor, who disclosed that there were moments during the struggle when he was tempted to quit, thanked the leadership of the PDP for providing him shelter under the umbrella when he was swept into the rain by the APC.

“Let me use this opportunity to thank the chairman of the PDP Governors’ Forum, Alhaji Aminu Tambuwwal, Governor of Sokoto state, and our other colleagues, particularly Governor Nysom Wike of Rivers State, Governor Umahi of Ebonyi state, my brother, Governor Ifeanyi Okowa of Delta state, and all the Excellencies and many more who are not here.

“We are eternally grateful to PDP governors, leaders of our great party particularly the national chairman, Uche Secondus, and all other members of the National Working Committee who have provided us that shelter under that large umbrella in a storm when we were pushed out.

“With your continue support, we will make Edo greater than we met it. As children of God, we will be magnanimous in victory but we will not forget that when the rains were beating us PDP provided us with the umbrella,” he said.

The PDP governorship candidate also thanked the election committee and the third of his co-aspirants who stepped down for him, noting that his emergence would not have been possible without their magnanimity.

He said: “I salute all Edo people at home and abroad, as well as our friends from other states, for standing by the believe that a better Edo state is possible, if we allow the people and not over-bearing godfathers to lead.

“My brother, Engineer Gideon Ikhine, I thank you, and my younger brother Hon.Omoregie Ogbeide-Ihama, your decision to step down for me, I don’t really know how to appreciate it but I don’t know how to say it yet.”

“I was called and humbled by this call to action, and challenged to confront any man-made barrier that will stand in our way to progress in Edo State.”

Earlier, the primary election committee chairman and Governor of Bauchi State, Engr. Bala Mohammed, announced that out of the 2,234 delegates of the party, 2,202 were accredited for the election, but 2,024 voted.

Of these figures, Obaseki scored a total of 1,952 votes, representing 96.4 of total votes cast, while 72 votes were voided.

Mohammed further explained that since the other aspirants stepped down for Obaseki, any votes cast for them is deemed voided.

“Following the transparent and credible manner in which this primary election has been conducted and as a Chief Returning Officer, I hereby declared Governor Godwin Obaseki the winner of the primary,” he declared.