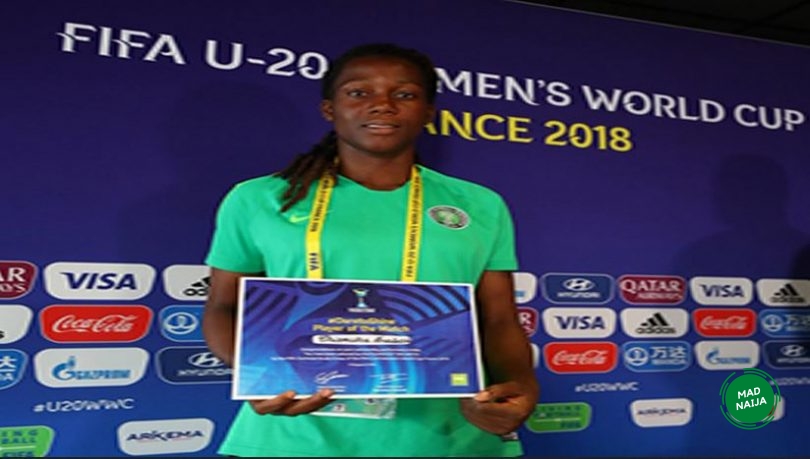 JUST IN! How My Mum Secretly Took Dad’s Money To Support My Career

Chiamaka Nnadozie talks about her experiences with the national team, her humble beginnings, and more in this interview. 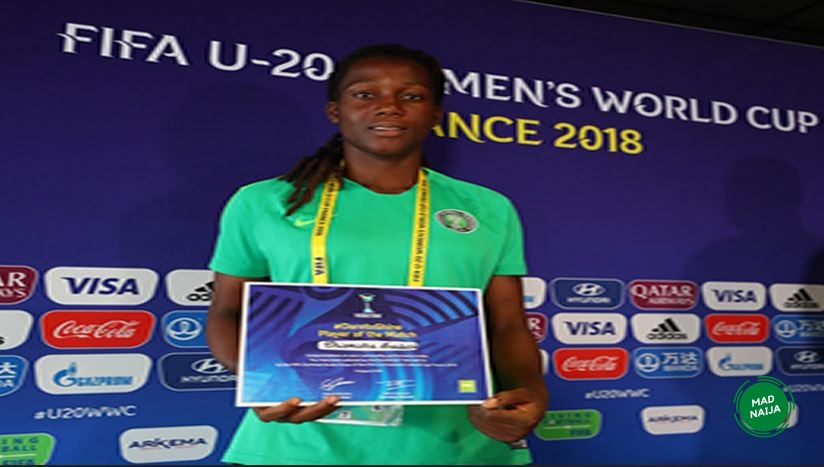 Super Falcons goalkeeper, Chiamaka Nnadozie, the youngest goalkeeper to keep a clean sheet at the Women’s World Cup, tells KELVIN EKERETE about her experiences with the national team, her humble beginnings and more in this interview

You joined Paris FC from Rivers Angels in January on an 18-month deal. How are you coping with the new environment?

It hasn’t been easy, I miss my family in Nigeria so much, but I also have a family here. I’ve been able to adjust to the weather in France. I came here during the winter season. When I came in, the weather was really cold and I used to wear about three cloths in all but after a while, I only wear one and my jacket is enough to keep me warm.

How did you begin your football journey?

Football runs in my family. I grew up amid boys that loved playing football. I was the youngest girl and whenever I went out to play with the bigger girls, they chased me away but when I got home, I was always stuck with my siblings and cousins, who are boys. Most times when they played football, I just sat and watched, but with time, I joined them and that was what inspired me to start playing.

Was goalkeeping your first choice position?

Becoming a goalkeeper was never part of the plan for me. In 2012, during the National Sports Festival period, we were preparing for an elimination game in Umuahia. We were playing a friendly game against an academy’s U-13 boys and were losing 12-2. We went for the game with just one keeper and at a point, she became tired. I asked the coach if I could go and take her place and he was skeptical about letting me play, so he took a ball and tested my ball-handling skills. He was impressed with it and after the game, he called me to a corner and advised me as a father.

He assured me of making the squad if I continued keeping. I refused. So, whenever I went for training, he would keep me on the bench. He saw the talent in me and that was something I couldn’t see in myself at that time. After some time, my friends advised me to obey the coach.

When my coach saw the change, he encouraged me, bought gloves for me and that was how I became a goalkeeper.

Were your parents and siblings supportive?

There was a lot of resistance from home. My dad and my elder brother didn’t support me at first. My dad would say girls don’t play football, and that I must go to school and after that, I must learn how to sew. But my mum was very supportive. Sometimes she would steal money from my dad to give me as transport for training. Several times she lied to him that I went to her sister’s place to stay, while I went out to play football. But everything changed when he saw me on television. After that, he started supporting me, but at first, he and my elder brother didn’t support me. They tried to stop me. They discouraged me but instead of giving up, I ran away from home to stay at the stadium so I could be free.

What was it like playing at your first Women’s World Cup in France last year, your debut appearance at the event?

It was fantastic. I never believed that at 18, I would be playing at the senior World Cup, that I would make the team, that I would even be in the Super Falcons. I can’t explain the feeling. To date, when I remember what happened there, I always thank God. It was a great feeling. It encouraged and inspired me. I wasn’t intimidated playing amongst the big stars in the team because before the World Cup, I had been with them to several tournaments.

What was the motivating factor keeping the posts for the Falcons at the World Cup?

At first, it was challenging and I had to encourage and keep myself. Another source of encouragement was Francis Uzoho, who came from nowhere to represent Nigeria at the 2018 World Cup.

I wasn’t looking at anyone; I was just doing my thing, trying to perfect the things I wasn’t good at. I was just making efforts to be better. I was surprised when I was called to represent the nation.

You set a record as the youngest keeper ever to keep a clean sheet at the event. How does this make you feel?

I’m elated to become the youngest goalkeeper to keep a World Cup clean sheet. I’m looking forward to creating more records. Everyone was proud of me.

During the Falcons’ last group game, a 1-0 loss to hosts France, you reacted angrily after the French were asked to retake a penalty they initially missed…

(Cuts in) I was very mad. I never expected them to retake the penalty. I went into the game very determined to prove myself because the last time we played them (France) in 2018 in a friendly, we lost 8-0 and I was the one in goal. So, during the World Cup, I received a lot of calls and texts from friends joking and telling me I was going to concede up to 10 goals. I knew they were joking, but I was determined to keep a clean sheet. During the game, I was scared, I was nervous because that was my second competitive game for the team. The stadium was filled, the weather was really cold, so a lot of things were going through my mind. When the penalty was awarded, I was like, this was going to spoil my fun.  After I caught the first one and the player was asked to retake it, I was really mad. I almost cried, but I knew if I did, it was going to affect my game, so I stayed calm. My teammates were there for me after the penalty. Even after they scored the penalty, I made some other good saves during the game that I was proud of. It wasn’t easy playing against a host nation especially a very good side like France.

Do you think your performance at the World Cup exposed the fact that there are very good goalkeepers in Africa?

Of course. During the FIFA ranking, I and South Africa goalkeeper (Andile Dlamini) were in the list of best keepers and I think that shows Africans are also developing. I believe what the Europeans and Americans can do, we can as well. I have seen a lot of great keepers on the continent. Most times after a game, I go to tell them how good they are. Ghana and South Africa have very good goalkeepers. Even if they are not yet exposed, they are still good. After the game against France at the World Cup, the Ghanaian keeper called me and told me that I did very well and that I made Africa proud.

You caught three spot-kicks during a penalty shootout at the African Games in 2019. Are you a penalty kick specialist?

I’m not a specialist, it is not a talent but it is by the grace of God. My coach talks about game reading all the time. As a goalkeeper, you need to read games, calculate things. With these techniques, I get to catch some kicks, sometimes I don’t.

ALSO SEE:  Single Mother Commits Suicide In Port Harcourt After Seeking For Help On FB But No One Helped.

How long are you hoping to stay as Falcon’s first-choice keeper?

I’m not competing with anyone. I just do what I’m good at. I might go camping tomorrow and there is someone else. I believe in grace, I can’t predict where I’ll be tomorrow. If there is a better person, they can take that spot. We are playing for the nation and the best should always be used for matches.

If not football, what would you have been?

When I was growing up, I had two things in mind about my future. Poverty took the first away from me, while football took the other. Poverty prevented me from being an accountant. My mother is a businesswoman and I was good at Mathematics, so I wanted to become an accountant but there was no money, there was no help. After my WAEC, I didn’t further my education at the university because of poverty. Secondly, I wanted to become a soldier. It’s a profession I loved so much and my elder brother supported my dream, but I told myself if I played football from the age I was then to 20 years and I didn’t make it, I would stop and enroll to become a soldier. But I’m grateful to God that everything worked out because even at the age of 15, I represented Nigeria at the U-17 level. It was just like a movie, but all thanks to God.

Do you have plans to further your education?

No. Combining education and football is not easy. For now, I’ll take things one at a time.

How soon are you planning to get married?

I am in a relationship. Marriage waits for no one. If you want to wait till the end of your career before getting married, you might have gotten old by then. One thing about football is that when you’re making the money, you find it difficult to settle down because you always want to get more. But for me, if the opportunity comes right now, I will tell him, ‘fine we can get married, but there is no way I can be pregnant and play football at the same time.’ So, it’s going to be something we’ll plan before getting into it. Some players in the Falcons are married but I think there is a plan between the couples on how to go about their affairs. If a man says he wants to marry me now, I’ll ask him about his plans. If he asks me to stop football I will, but first, he has to be able to feed me. I’m not going to be a housewife; you’ll get me something befitting to do, where I can make good money. For me, anytime a man comes to ask my hand in marriage, I’m ready, but there must be a plan.