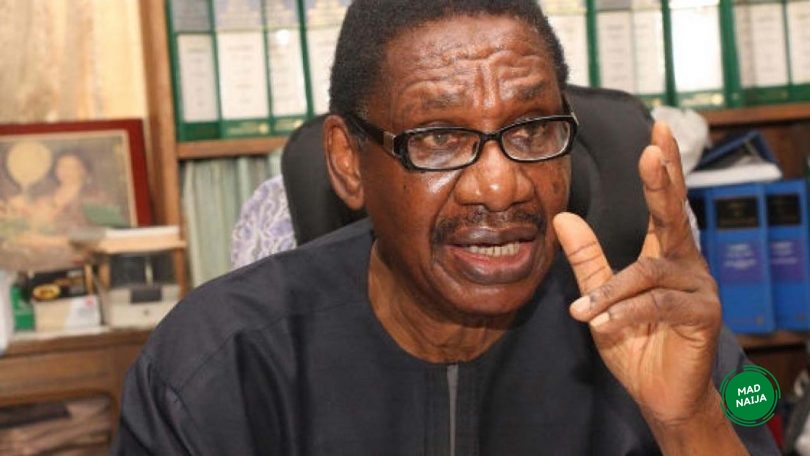 The Presidential Advisory Committee Against Corruption, PACAC, led by Prof. Itse Sagay, has vehemently kicked against the proposed bill for the amendment of the establishment Act of the Economic and Financial Crimes Commission, EFCC.

Sagay, in a statement on Wednesday, called on Nigerians and the National Assembly to reject the bill.

The Minister of Justice and Attorney General of the Federation, Abubakar Malami yesterday disclosed that the Federal Executive Council, FEC, has approved the establishment of a new agency that will be saddled with proper coordination of all recovered looted assets.’

He said the new agency, known as the ‘Proceeds of Crime Recovery and Management Agency’, will oversee the responsibility of managing the assets that constitute the proceeds of crime in Nigeria.

The Minister said the FEC has approved transmission of a bill, titled, “Proceeds of Crime Recovery and Management Agency Bill,” to the National Assembly.

But Sagay said the planned amendment was part of an on-going dangerous attempt to destroy Nigeria’s anti-corruption infrastructure and return it to the situation it was, during the dark days before 2015.

Prof Sagay accused those behind the amendment bill of being representatives of the corrupt establishment that brought Nigeria to its knees and subjected Nigerians to humiliation as a result of an extremely negative reputation internationally.

ALSO SEE:  Drama As UNN Lecturer Is Called Out For Allegedly Engaging In S3x For Grades After His Death

The Senior advocate noted that the new bill will weaken the EFCC and its officials and confer enormous power on the office of the Attorney General of the Federation and Minister of Justice.

He said the bill was being sponsored by those that were “too ashamed to put their names to the draft bill being circulated”, describing such people as the real “enemies of Nigeria”.

Sagay noted that the new bill would effectively now turn Nigeria’s topmost anti-graft agency into a department in the Ministry of Justice.

“With all the above-established facts, the gravity of the proposed change becomes overwhelming,” the statement added.

“When in addition to all this, we recall the well-known proclivity of the Attorney-General for entering nolle procequi in favor of major political and governmental figures, this move to effectively scrap the EFCC becomes more alarming.

“We, therefore, call on the National Assembly and all Nigerians to vigorously reject this attempt to perpetrate a fraud on the nation by effectively scuttling the EFCC and shutting down Nigeria’s anti-corruption war.”

Sagay pointed out that the offensive highlights of the proposed bill, include, “Repeal of the current EFCC Establishment Act which has been a spectacular success and has brought Nigeria into the limelight as a major force against corruption.

“The replacement of the Executive Chairman of the EFCC with a Director-General who is effective to be appointed by the Attorney-General.”

He said that this will eliminate the freedom currently enjoyed by the EFCC and replace it under the complete control of the Attorney-General.