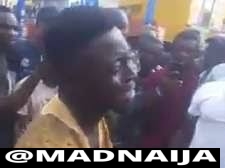 You might have been hearing in the time past that people bought phones from vendors, but on getting home, Instead of meeting the items they bought, they will meet solid food items packaged inside thecartons of the phones they bought.

Similar case like the one mentioned above, happened yesterday in computer, Ikeja, the capital of Lagos State. It was revealed by the man who fell victim that he just bought the iPhone, iPhone 7 from a vendor at the price of #20,000. When people heard the amount he called, they blamed him for buying such, telling him that iPhone 7 costs more than the amount he paid.

The man broke into tears and attracted passersby, after opening the iPhone carton on his way home, only to find out that the phone was missing and that, it was fufu that was stocked inside the carton.

The man who could not control his sorrow started rolling on the floor, crying and shouting for help, saying he does not want to loose #20,000 like that.

– Man breaks down in tears after discovering that the iPhone he bought is cassava filled pack.