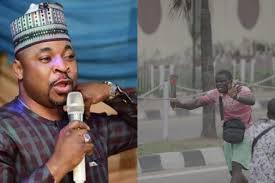 Popular Lagos personalities MC Oluomo and Baba Alado, have been accused of sending armed thugs to Alausa in Lagos to intimidate protesters.

The NURTW chairman allegedly sent the thugs to wreak havoc amongst the protesters till the government is forced to order a state of emergency.

The thugs reportedly arrived in a government-owned BRT bus lending more credence to the rumor that they were state hired.