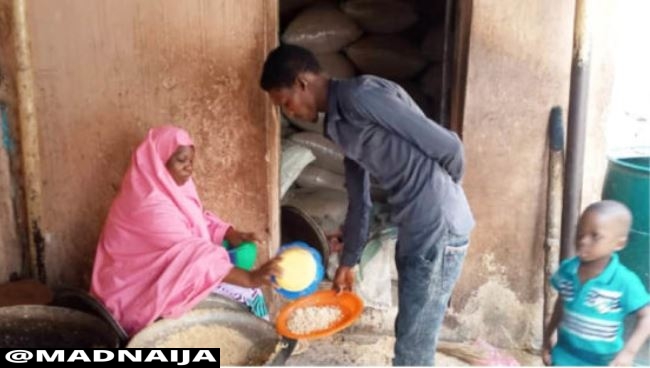 Malama Hafsat, otherwise known as Shama-Shama, operates from her house at Gwange ward in Damaturu metropolis.

One could only estimate the crowd of  customers who troop to the residence of 50-year-old Hafsat Idriss every day to have their fill of her delicious rice and beans.

Malama Hafsat, otherwise known as Shama-Shama, operates from her house at Gwange ward in Damaturu metropolis.

Hafsat, who said she started the business 25 years ago, is now  a household name to artisans, commercial motorcycle and tricycle riders, water vendors and  bricklayers among many other low income earners in Damaturu.

Speaking with Kanem Trust, Malama Hafsat, a widow, said she was inspired into the business because she liked to do things to take care of herself and support people around her.

“I started this business since my husband was alive and became more determined to succeed after he died 18 years ago.

“I immediately started having more customers and was forced to upgrade the business to meet their expectations.

“I bought additional pots and constructed a tent outside for those who might  want to eat their food here.”

She said at the  height of the business, she used to cook four bags of rice and  one bag of beans a day.

She, however, lamented that the business was becoming harder and now cooked only two bags of rice a day.

Hafsat said the business was paying as she used it to look after her family even as a widow.

“I feed my children,  pay their school fees, in both Islamic and western schools, and married off four girls and two boys among my children from the proceed of my business.

“Apart from taking care of myself and family, I provide employment to my relations and neighbours, who assist me to serve my customers.”

Many of her customers said they patronise the business because of the low price and richness of the food.

Ali Manu, a tricycle operator, said he always makes sure he comes early so as not to miss it.

Manu, who was also buying for seven other friends, said the price for a plate could go for as low as N50.

Another customer, Mallam Bukar, told Kanem Trust that he has been a customer for a long time and was always attracted to its low price and good taste.

Malama Hafsat appealed to Governor Buni to include food vendors, especially those selling at home, among those to be assisted by his government so as to expand their businesses.