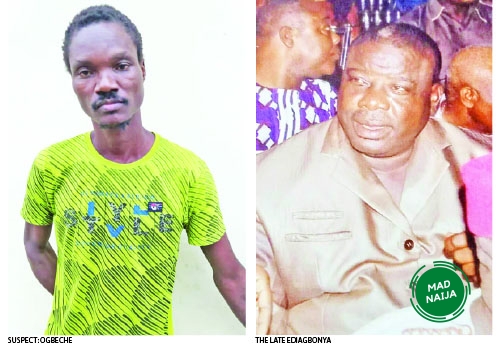 Morning News: Reason Behind Edo APC leader And Why He Was killed

Suspect details how ex-commissioner was abducted and murdered

Ten weeks after a former Commissioner for Youth and Sports in Edo State, Presley Ediagbonya was abducted from his farm and later murdered, one of his employees, Andrew Ogbeche who is a major suspect in the crime has opened up on what led to the kidnap of the All Progressives Congress chieftain.

Ediagbonya was kidnapped from his farm at Utese, Ovia North East Local Government Area of the state in the early hours of May 16. His abductors who initially asked for N15 million ransom later directed his family to drop N2 million in Patani, a border town between Delta and Bayelsa.

Shortly after the family dropped the ransom, the abductors were said to have sent an SMS to them to pick his body from a cassava farm near Utese where he was kidnapped. Hunters discovered his corpse 14 days after he was abducted.

A clue to the crime however surfaced when police Intelligence Response Team (IRT) detectives headed by DCP Abba Kyari arrested Andrew Ogbeche who allegedly participated in the abduction and killing of the Edo APC leader.

It was gathered that on May 3, 2020, a text message was sent to the late commissioner by unknown persons threatening to kidnap or murder him. This, they did two weeks later. The abductors successfully collected the sum of N1million out of the agreed N2million before they sent a text to the family that they had killed him.

Through the deployment of technology, the IRT detectives deployed to Benin were able to track and arrest Andrew. The investigation also revealed that the initial threat message to the deceased emanated from Andrew’s phone. He claimed that it was one Paul currently on the run that brought the idea and that a sum of N100,000 was given to him after the ransom was collected.

Background to the crime

Speaking fluently in English, Andrew Ogbeche insists that his only involvement was to introduce Paul to the late APC chieftain. “I am 35-year-old and a native of Beware village in Ogoja Local Government Area of Cross River State. I am not married yet. I read English Education at the University of Calabar. I relocated to Edo after my graduation in 2013 in search of greener pasture. Since I graduated, I have not been able to raise money to marry any woman and I don’t know when.  It’s because of financial constraints that I accepted to work as a laborer at the farm of the late commissioner. He owns a big Palm Oil farm at Okada village and I am one of his workers. Part of my job is to clear grasses, gather the ripe palm nuts and take them to the factory to squeeze out the oil.

“The job is so demanding that I had to work twice every day with about two hours break in-between the shifts. Despite all these, he could only afford to pay me N10,000 a month. I should have refused that offer but I needed money to feed. I had only worked for two months before I resigned and he is still owing me a salary of one month.”

On what transpired, Andrew claimed that he met Paul at a motor park and from there they got talking. “While I was still working for the late commissioner, I had no plans to kidnap him because he was very nice to me although he was not paying much. On my way home weeks before the kidnap, I met Paul at the motor park and he pleaded for money to pay his transport fare. I felt so bad that a young man full of life cannot afford to transport home. I gave him money and we became friends. I told him where I was working and he promised to visit and try if he could also be employed. On his first visit, he told me that the man was very rich and that I was enjoying my life. He was impressed by what he saw because of the house on the farm and the type of cars that my late boss drove shows that he is very rich.

“He kept visiting and even met with the commissioner one of the days and they started talking. The commissioner had promised to employ him as soon as there was any space. It was during one of such visits that he told me of his plans to kidnap the late commissioner. I warned him initially but he insisted that nothing will stop him and if I attempt to expose him, he will kill me. I am the only son of my mother and I cannot allow anyone to kill me and breaks her heart. I need to stay alive so that she can reap the fruit of her labor.

“It was because Paul had decided to kidnap the man that he kept visiting to study the terrain. Few weeks before the man was kidnapped, I resigned from the job because the N10,000 salary was not even enough for my transportation. He later told me that he had kidnapped the man. He even sent N100,000 to me as my share. I took the money because I was so broke. Most importantly, since I knew about the kidnap and I was asked to keep quiet, they needed to pay for my silence. But believe me, I never knew that they have killed the man. If I had an idea, I won’t take that money because it is blood money. I learned of his death through another source. It was one of my friends that lives close to his house that informed me of his death. I was devastated because I have spent the money. I called Paul and he did not give me any strong explanation. I am suspecting that the commissioner saw his face and that was why they killed him.”

Begging for mercy and trying so hard to exonerate himself from the act, Andrew said, “ My record is very clean, in fact, for the past 35 years of my life I have never stepped into a police station. I have never had any reason to even visit a policeman, so believe me when I say that I am not responsible for the death of the commissioner. I don’t even understand why I was arrested although I made a mistake by collecting that money. I am sorry and will assist the police to find Paul.”