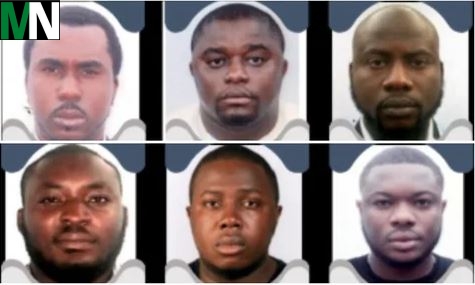 MUST READ! FBI Most Wanted Nigerian Scammers List, Seeking Information On Their Whereabouts

The FBI, on Saturday, via its official handle tweeted the photos of the Nigerian suspects.

The United States’ Federal Bureau of Investigation has appealed to members of the public to furnish it with vital information that would lead to the arrest of six Nigerians indicted for alleged involvement in over $6m internet fraud.

The FBI, on Saturday, via its official handle tweeted the photos of the suspects with the caption, “Help the FBI find ​six Nigerian nationals wanted for their involvement in ​business​ email ​compromise schemes resulting in over $6 ​million in losses.”

It urged persons with important details on the suspects to submit such on http://tips.fbi.gov, adding that they are not required to disclose their names or any personal information.

“Today, in a coordinated action with the US Department of Justice, the Department of the Treasury’s Office of Foreign Assets Control took action against six Nigerian nationals for conducting an elaborate scheme to steal over $6m from victims across the US.

“The individuals designated today targeted US businesses and individuals through deceptive global threats known as Business Email Compromise and romance fraud. American citizens lost over $6,000,000 due to these individuals’ BEC fraud schemes, in which they impersonated business executives and requested and received wire transfers from legitimate business accounts.

“Money was also stolen from innocent Americans by romance fraud, in which the designees masqueraded as affectionate partners to gain trust from victims,” the FBI had said.