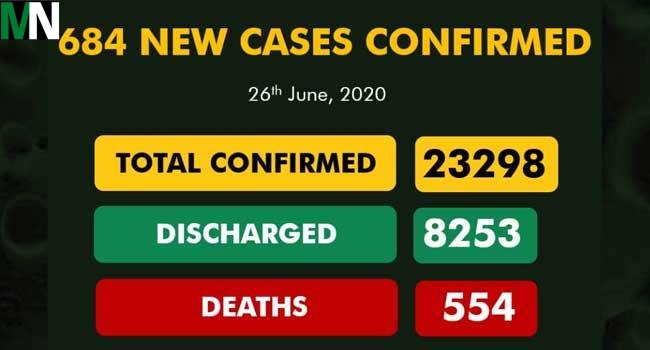 Abia Commissioner for Health, Dr Joe Osuji, says the major problem confronting the fight against COVID-19 in the state is people’s disbelief that the virus is real.

The commissioner regretted that the people rather believed that the state government was using it to collect money from the Federal Government or donor agencies.

“But it is not true. The truth is that COVID-19 is real and it has come to stay with us. So we have to be extremely careful in its containment,” he said. 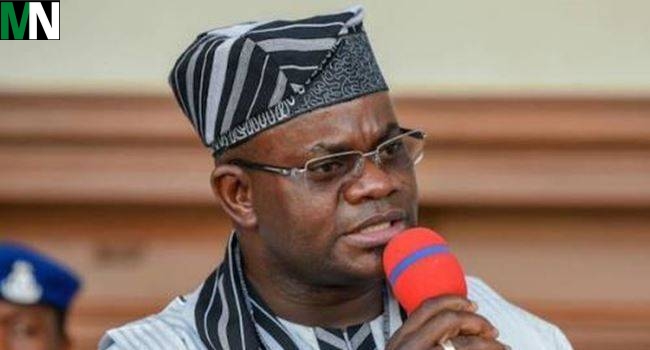 Bello, who stated this when he featured in a Channels Television’s programme, Politics Today, said the dissolution of the APC National Working Committee (NWC) and other decisions taken during the party’s National Executive Council (NEC) meeting held on Thursday would make it stronger.

The governor also dismissed insinuations that the party would collapse after President Muhammadu Buhari leaves office in 2023.

Bello said: “APC is getting stronger, and like I said, it is going to be proved in the next few days or the next few weeks to come in the election of Edo , Ondo, Anambra, Ekiti, Osun States.

“It’s unfortunate that our colleague, my brother, and my in-law, Obaseki has left us, but as a party and a party-loyal man, we have to reclaim him.

2. EDO GUBER: I need your help to ‘win the war ahead’, Obaseki tells supporters 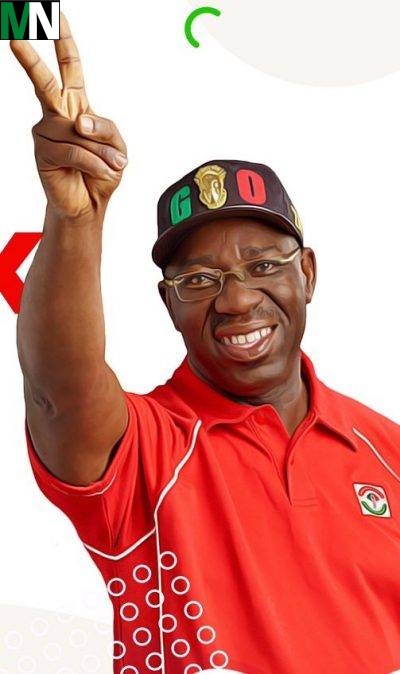 The governor claimed in a statement that he was “dragged and forced into the battles.”

Obaseki, who joined the PDP from the All Progressives Congress (APC) about 10 days ago, commended members of the opposition party for giving him the ticket to represent the party in the September 19 governorship election in Edo State.

The governor quit the APC after the party’s screening panel disqualified him from the party’s governorship primaries held on June 22 over alleged discrepancies in his certificates.

After he joined the PDP, the party’s leadership granted him a waiver to contest the election on its platform, a decision that pitched him against other governorship aspirants in the party.

3. Magu vows to go after looters hiding in Ghana 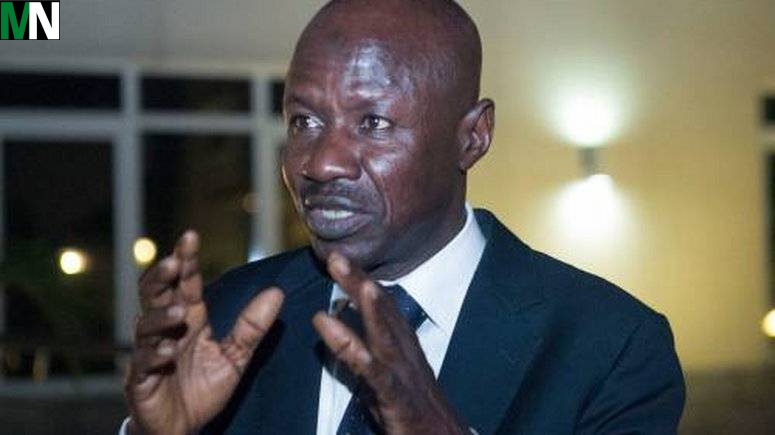 Ibrahim Magu, acting chairman of the Economic and Financial Crime Commission (EFCC) has vowed to go after many Nigeria looters who are hiding in Ghana.

Magu said the EFCC has started making efforts to bring the looters and the assets they stole back to Nigeria.

The EFCC boss said this on Friday, June 26, 2020, when a delegation of the Chartered Institute of Public Resources Management and Politics (CIPRMP) visited the commission’s headquarters.

He said the commission will partner with its counterpart in Ghana to recover the stolen assets.

He said, “Corruption is a borderless crime. We are putting our resources together to allow us go to Ghana without restrictions and recovery our stolen property back home.

“I am appealing to Nigerians to trust the Commission with relevant information about corrupt practices in the country.

“There are a lot of looters hiding in Ghana. We are already talking, we will bring them back. We will go bring the assets back to the country.” 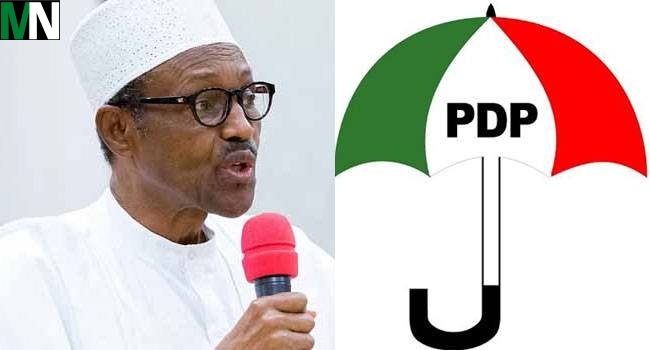 In a statement by the party’s spokesman, Kola Ologbondigan, the PDP described the action as the height of corruption and desecration of the sanctity of the seat of power.

The main opposition party noted that using government facilities and resources to promote the activities of the APC, the Attorney General of the Federation, Abubakar Malami has become culpable of the same offence for which he has been prosecuting innocent Nigerians.

PDP, therefore, asked Malami to resign immediately from office and surrender himself for prosecution.

While condemning the conduct of the APC NEC meeting, Ologbondiyan described it as a coup against the party’s constitution which prescribes 14 days’ notice for regular NEC meeting and seven days’ notice in the case of an emergency meeting 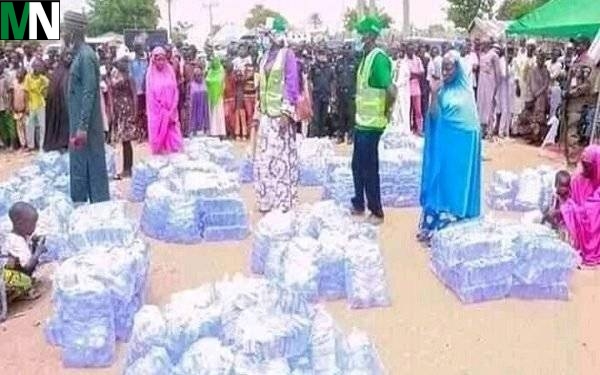 The Nation, however, gathered other start up materials were distributed at the empowerment programme, which held on Thursday.

They include pasta making machines, flour, packs of sachet water and N5000 given to about 250 women.

The items were said to be distributed under the First Lady pet project “Almuhibbah Foundation”.

However, pictures of sachet war have been generating reactions from social media users.

Thousands of social media users blasted the First Lady over the picture.

In the pictures shared, the women could be seen standing on queues to receive packs of sachet water placed on the floor.

A facebook user, Oyedokun Oladayo, said: ” This is total nonsense, not even with freezer oooo. So what’s the cost of the pure water that’s not up to hundred bags and you called this empowerment . May God help us.”

Musa Dalhatu wrote: ” This is absurd. How much will it cost these women to transport heavy packs of pure water to their respective destination?

”It surely must cost them more than the value of the water for some of them that came from a distance . Why are we like this?”

Okekemi Adewale Adediran, in her post, said: ”Tomorrow now they will tell us that it’s 100 million that was used to purchase those sachet bags.”

Aninta Judith posted: ”This is the type of things we receive from the people whom we sold our dreams to. This is really shameful. Can you imagine this as a First Lady of Bauchi State saving business empowerment programme.” Nigeria ‘s Federal Airport Authority, FAAN says the Passenger Service Fee will be raised from 1,000 naira to 2,000 nairas on local flights and from 50 dollars to 100 dollars on international flights effective August 1st 2020.

The new charges are contained in a memo signed by FAAN Managing Director Rabiu Yadudu to the Airline Operators Committee. 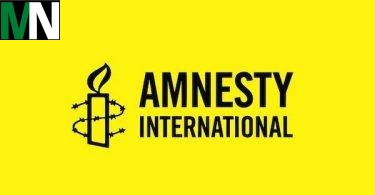 Amnesty International Nigeria has accused the Federal Government of empowering officers of Special Anti-Robbery Squad (SARS) to maltreat Nigerians by not holding any of them accountable.

It said despite passing the anti-torture bill in 2017, there is continous evidence SARS operatives continue to use torture and other ill-treatment to execute, punish and extract information from suspects.

AI added that SARS officers have turned their duty to protect Nigerians into an opportunity for extortion and stealing money, property and other valuables belonging to suspects and their families.

The organisation stated this in its report, ‘Time to end Impunity, Amnesty International documents at least 82 cases of torture, ill treatment and extra-judicial execution by SARS between January 2017 and May 2020.’

It said Nigerian authorities must go beyond lip service and ensure there is real reform.

AI, in a statement by its Media Manager, Isa Sanusi alleged: “The Nigerian authorities have failed to prosecute a single officer from the notorious Special Anti-Robbery Squad (SARS), despite anti-torture legislation passed in 2017 and evidence that its members continue to use torture and other ill-treatment to execute, punish and extract information from suspects.”

“Nigerians are outraged by the impunity with which SARS perpetrates horrific human rights violations.

“The systemic use of torture and other ill treatment by SARS officers for police investigations and the continued existence of torture chambers within the Nigerian Police Force points to an absolute disregard for international human rights laws and standards.”

AI added: “Amnesty International’s investigation reveals a disturbing pattern of abuse of detainees in SARS custody despite the 2017 Anti-Torture Act.

“In many cases, Amnesty International bore witness to the scars, bruises, and dried blood on victims’ bodies. Many of them were subjected to beatings with sticks and machetes and denied medical care.

“The findings of this report also show that these horrific violations were carried out under the supervision of high-ranking police officers.

“Pervasive torture and other ill-treatment remain routine practice during SARS’ daily operations and at its detention centres.

“One of the officers used an exhaust pipe to hit me on my teeth, breaking my teeth.

“Miracle, 23 In March 2017, 23-year-old Miracle was arrested and detained by SARS officers in Neni, Anambra State, southeast Nigeria, accused of the theft of a laptop. He was tortured and given hardly any food during the 40 days he was in detention before he was charged and brought before a court. Mr Bolaji Tunji, media aide of former governor of Oyo State, Sen. Abiola Ajimobi, on Friday in Ibadan announced that burial of the late politician would take place on 28 June.

He added that the deceased would be laid to rest at the Senator Ishaq Abiola Ajimobi Central Mosque, Oke-Ado, Ibadan by 12 noon.

“Details of the funeral ceremony of Sen. Abiola Ajimobi have been released by the family.

“In close consultation with the governments of Lagos and Oyo States, the date for the burial has been announced. 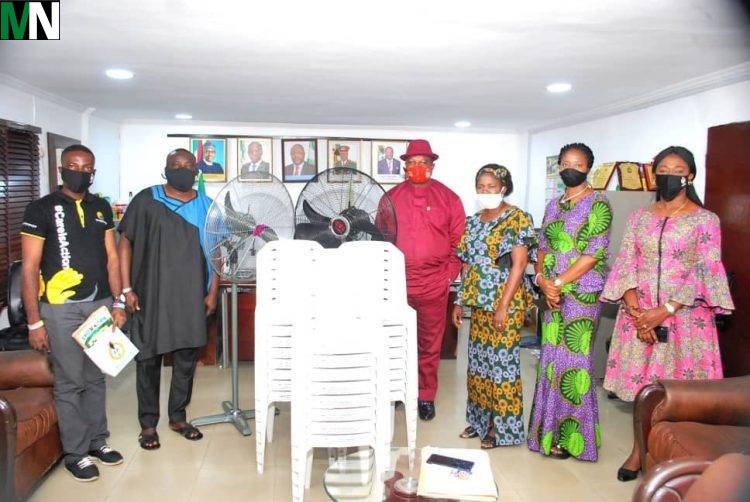 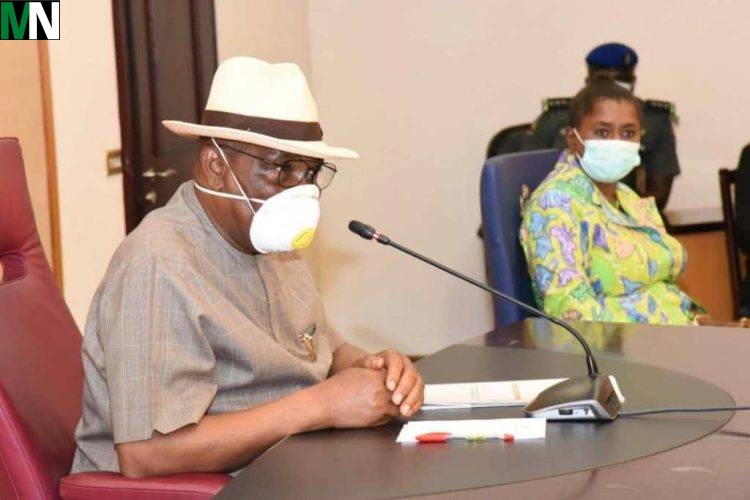 Security operatives in Rivers have continued to sabotage the movement restriction measures put in place by Governor Nyesom Wike to contain spread of COVID-19 pandemic in the state.

The security agents deployed to man the state boundaries and prevent unauthorised entry of vehicles have turned the checkpoints into extortion spots.

Investigation carried out by this correspondent who recently traveled through Elele-Omerelu-Owerri road to Imo State showed that the state’s Covid-19 Taskforce, charged with the responsibility of controlling the borders, has compromised. The Coordinator, Defence Media Operations, Maj.-Gen. John Enenche, in a statement on Thursday, said the air interdiction missions were conducted by the troops under the subsidiary Operation Wutan Daji on June 23.

Enenche said the airstrikes resulted in the killing of some key armed bandits’ leaders as well as several of their fighters after series of Intelligence, Surveillance and Reconnaissance (ISR) missions.

He said the intelligence report led to the identification of the camps and a cave where the bandits store their weapons as well as hide to evade attacks.

According to him, the Air Component dispatched an enhanced force package of fighter jets and helicopter gunships to attack the location.

“At the first camp, some bandits, who had assembled for a meeting near one of the huts, were neutralized by the attack aircraft.

“At the second camp, a suspected high-value bandits’ leader along with some weapon-bearing fighters were seen in the vicinity of some huts.

“The attack aircraft engaged the target structures, scoring accurate hits and taking out the huts along with their occupants.

“The NAF jets also later recorded direct hits on the suspected bunker, from where some of the bandits were seen emerging, completely destroying it.

“Human Intelligence reports later confirmed that Hassan Tagwaye and his twin brother Hussain along with several other bandits were neutralized in the airstrikes, while a few escaped with injuries,” he said.

Enenche, however, urged the people in the affected areas to report those with sudden and suspicious injuries to the security forces to ensure that the escapees were mopped up.