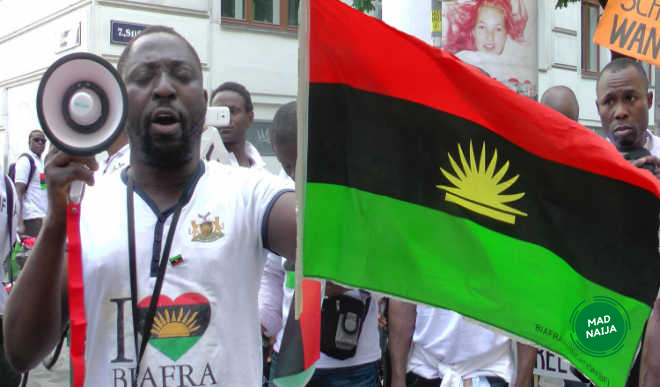 FacebookTwitter
President Muhammadu Buhari has been slammed for turning Nigerian into a Fulani empire by MASSOB.

MASSOB
Movement for the Actualisation of the Sovereign State of Biafra (MASSOB) has described Nigeria as a failed state even after opting out the sit-at-home order handed down by the Indigenous People of Biafra (IPOB) on October 1 to protest various killings and injustice done to the people of South East.

The group Leader, Uchenna Madu, in a statement, declared Nigeria as a failed state at 60, after independence and does not worth celebrating.
“We declare Nigeria as a dead state which has nothing to celebrate. At 60 years of independence, Nigeria is still struggling to stand up. Other nations, that got political independence with Nigeria at same period like Malaysia, have gone very far in global recognition.

“Though the British colonial masters did not design Nigeria to flourish and progress as a reputable entity.
“Under President Muhammadu Buhari, the Nigeria state has turned to Fulani empire where every other major and minor ethnic nationalities are not regarded. Fulani acknowledge their cows more than other ethnic nationalities in Nigeria.
“Any exercise that will derail the organised protest strike against the incessant increase of fuel prices and electric bills by the Nigeria Labour Union, Trade Union and Civil Society Organisations is working against the overall interest of the citizens. October 1 is a day of national protest against the insensitivity of the President Buhari’s administration.

“Biafra sit-at-home exercise is not significant on Nigeria’s special day. Whatever exercise Biafrans observe on October 1 will be viewed as supporting the dead Nigeria. May 30 is Biafra day anniversary,” Madu said.
Apart from the Movement for the Actualisation of the Sovereign State of Biafra, the Coalition of South East Youth Leaders (COSEYL), an umbrella body of various youth leadership in the country has also urged the public, especially youths to disregard the order in the interest of peace and harmony.
In a statement signed by the President General, Goodluck Ibem and Secretary General, Kanice Igwe, the youth leaders said such orders had resulted to bloodshed in the past and, therefore, advised that it is not necessary complying with such again.
Download Nulled WordPress Themes
Download Premium WordPress Themes Free
Download WordPress Themes
Free Download WordPress Themes
free online course
download intex firmware
Premium WordPress Themes Download