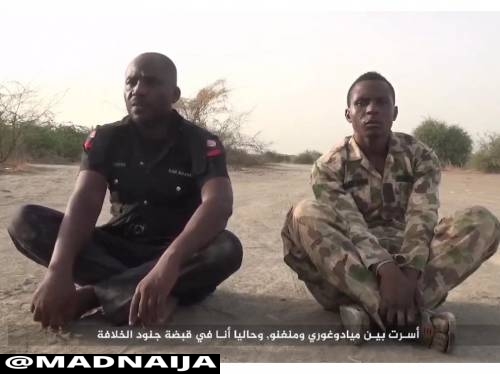 Boko Haram terrorists have executed a Nigerian soldier and policeman abducted in Borno.

The Nigerian soldier and policeman were executed by the terrorists
A Nigerian soldier and policeman have been executed by Boko Haram terrorists in Borno state.
The video dated Thursday, June 11, 2020, was made by a branch of Boko Haram that has sworn allegiance to the Islamic State West Africa.
Its release came 10 days after SaharaReporters exclusively reported the abduction of a soldier and three others at a checkpoint before Gasarwa Village, about 40 kilometres from Monguno Local Government Area in Borno State.
The video released shows two men kneeling in a field and introducing themselves as members of the Nigerian security forces before masked men in fatigues opened fire on them.
According to the slain security personnel, they were on a trip from Maiduguri to Monguno when they were ambushed and abducted by the insurgents whom they described as “Tilafa army”.
“I am 13NA/70/8374 Lance Corporal Emmanuel Oscar, I was captured by Tilafa’s along Maiduguri to Monguno,” the soldier said.
The policeman, who spoke in Hausa language, said, “My name is Yohanah Kilus, I am a policeman, my rank is inspector. I was abducted between Maiduguri and Monguno; I am presently in the custody of Tilafa soldiers.”
https://youtu.be/YbDVF5QHBtM
Download Nulled WordPress Themes
Premium WordPress Themes Download
Download Best WordPress Themes Free Download
Download Nulled WordPress Themes
free download udemy paid course
download lava firmware
Premium WordPress Themes Download