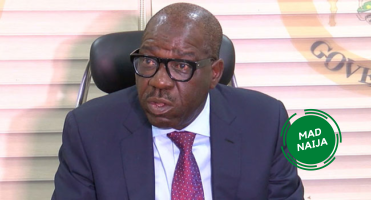 Wake And Sleep Governor: See How The Internet Crucified Obaseki for Sleeping Off While Talking With Kwankwanso.(Photo)

The internet is always brutal when it comes to leaders making a slip.

This photo of Obaseki pictured sleeping while talking to his guest Rabiu Musa Kwankwanso has gone wildly viral.

Even the way Kwankwanso was looking at Obaseki with would make you reel with laughter.

Come and hear what the internet is calling Obaseki, WAKE, AND SLEEP Governor. Sleepy SLEEPY Governor.

Funny enough if you google the word sleeping governor it is only Obaseki’s face you would see. ( Smiles, just google for yourself and see)

Anyway, let us take you through the comments on Obaseki sleeping off while playing host to his guest.

So, so sleep for bad market. Every International engagement…hmmm, na this sleep!”-Major Oloye

“That why he is wake and sleep”- Godwin

“Nah sleep he dey so ooo”-Oshiole

The man will be disgracing us everywhere he goes to, any small thing he don sleep-Jude.

When Oshiomole carried him on his back across the ocean, without water touching his legs, he didn’t value it. Now he will appreciate what Oshio and others suffered 4 years ago when they marketed an unknown product.
See how hard it is to market yourself now, even as a sitting governor. Reward for ingratitude. Aren’t seen anything yet.

Recall at a United Nations function Obaseki was caught sleeping.

ALSO SEE:  MUST-READ! All Primary, Secondary, And University Students Should Take Note Of These Things

So what are your views? Does Obaseki deserve all the YABIS for sleeping on DUTY?

ALSO SEE:  Top10 Breaking News In Nigeria Brought To You By MadNaija As At Thursday morning, September 3, 2020