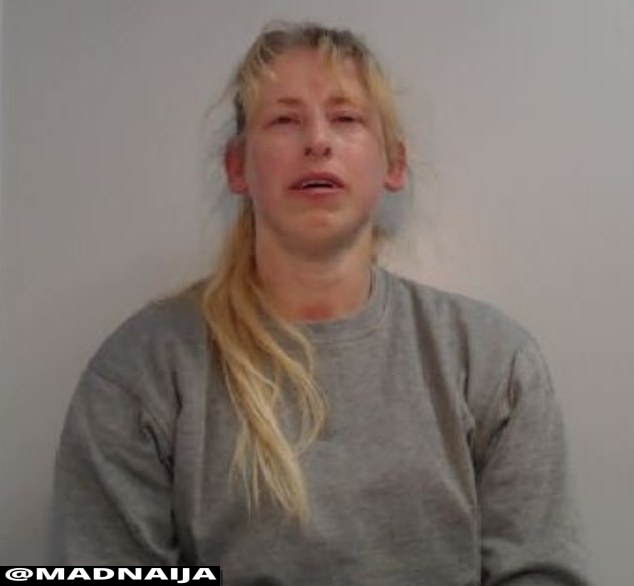 Janet Kearns flew into a rage when Alan Pearce did not personally telephone her to wish her happy birthday, assuming he was cheating on her.

A mother-of-two who stabbed her boyfriend and left him for dead because he texted her ‘happy birthday’ rather than calling her has been jailed for six years.

Janet Kearns had just turned 46 and flew into a rage when Alan Pearce, in his 60s, did not personally telephone her to wish her happy birthday, assuming he was cheating on her.

After replying ‘thank you’ to his text, Kearns stormed round to Mr Pearce’s third floor flat in Wythenshawe, Manchester and demanded to know why he had not called her.

She then stabbed him with a six inch kitchen knife as he was calling police for help.

Kearns watched calmly as blood poured out from underneath her victim’s arm, as he collapsed to the floor close to death after the wound severed an artery.

Mr Pearce was rushed to hospital and underwent emergency surgery for his wounds but, more than a year on since the attack, he has trouble moving his right hand.

He had to have plastic surgery to fix the deep wounds and may have to be operated on again.

The couple had met through work in May 2017 and quickly became friends before starting a relationship after a few weeks.

In a statement, Mr Pearce told police: ‘When I was lying on the lobby floor losing blood and getting weaker by the minute, I thought I might die. If it was not for the quick response of police officers and paramedics I would not be here today. I will always be grateful to them.

‘How could she be so callous just walking past me as I was on the floor bleeding to death? I still don’t have a sense of feeling in my right, index and middle fingers and part of my thumb.

‘The scars will always be with me mentally and physically but they won’t hold me back.’

Prosecutor Brian Berlyne said: ‘In August 2017 the defendant first noticed her becoming aggressive at times and she suspected him of being unfaithful. She struck his face but he did not report this to police.

‘Over the next year her behaviour became erratic. She became aggressive over trivial matters and she claimed he did not give her enough attention and on some occasions she used or threatened to use violence against him.

‘She damaged or destroyed his belongings and at one point he threatened to call police but she said ”you will be dead before they get here”. He became unhappy with the relationship but decided to continue with it in the hope it would improve.

‘By April 2019 things got even worse and he began to discuss ending the relationship, but she made it clear she did not want it to end and the relationship stumbled on.’

Mr Berlyne added: ‘On Friday 3 May they argued over the phone and he said it would be the last weekend of the relationship. The next day, which was her 46th birthday, he sent her a text saying ”happy birthday” at around 8am.

‘Three hours later he did receive a response saying: ”thank you” but at 1.43pm that day she went into his flat and asked him why he had not called her. She was speaking in an aggressive manner, and they began to grapple with each other. She tried to pick up her flat key to throw in his face and knocked over a plant pot.

‘He then told her he would call police but as he began looking for his mobile, she grabbed it from the sofa and hurled it against the wall on the hallway. He then tried to use the landline but she threw it at the wall too. He said he would ask a neighbour to call police but although she blocked his path he managed to push past her picked up the mobile began calling police outside.

‘She followed him but then returned to the flat where she took a knife and attacked the complainant in the lobby while he was on the phone to police. He was holding his mobile in his left hand and his right arm was stretched out in attempt to try and stop her from grabbing the phone off him.

‘He then felt something being drawn across the inside of his right arm near his elbow. He was bleeding and she was holding the knife but he managed to tell the operator to get an ambulance. He saw her go back through the lobby door and she returned to the flat and put the knife back.

‘She is believed to have cleaned it before police arrived. She must have seen that the complainant had lost a substantial amount of blood and he could feel the blood continuing to pump out of his arm and realised his artery was severed. He felt faint and unable to stand, and then he sank onto his knees. The complainant saw her looking at him and felt she wanted him to die.

‘Despite the fact she saw there was a large pool of blood by now, she offered him no help. There was no attempt to summon help. The complainant was still on the phone on the floor at this point.

‘Police and paramedics arrived five minutes later and he was taken to hospital. He was pale, sweating and shocked at the blood loss.’

Doctors performed life saving surgery on Mr Pearce but he is unlikely to ever regain completely normal sensation and function in his right hand.

Kearns later told police she wanted to see the victim’s mobile phone as she thought he was being unfaithful and he said he was going to call police.

She said she grabbed the knife to feel more secure in case he attacked her and claimed the wounds were accidental.

She said she loved him but would become ‘irate when she lost control.’

She said she was sorry and did not intend to cause harm.

In mitigation her lawyer Ben Kaufman said: ‘The defendant had post traumatic stress disorder from a road traffic accident she had been involved in in December 2018. The attack happened at the spur of the moment due to an argument.’

But sentencing Judge Hilary Manley told Kearns: ‘Your relationship with Mr Pearce was marred by jealousy and you attacked him and tried to take his phone. You took a six inch knife from the kitchen and struck him with it, causing serious injury. You intended to cause him serious harm.

‘The ongoing effect on your victim is profound. He had to have surgery and has been left with scarring and limited functionality in his dominant hand.

It is your good fortune that he survived and police and emergency services were able to get to the scene. If they had not you could have been facing a murder charge.’

ALSO SEE:  SO SAD! 3-Year-Old Girl Is Raped And Murdered As Part Of An On-going Feud Between Rival Families