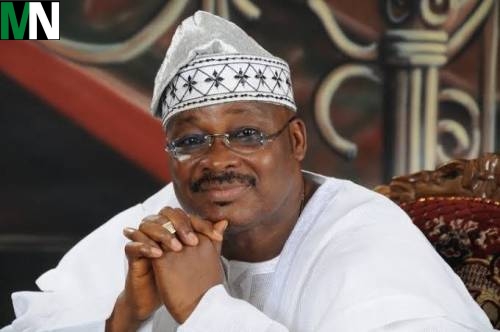 Ajimobi stated this during an interview with Splash FM some weeks before he was hospitalized.

Former Governor of Oyo State, Abiola Ajimobi, once revealed that he has always told God he wants to die at the age of 70.

Ajimobi stated this during an interview with Splash FM some weeks before he was hospitalized.

Ajimobi, who spoke in Yoruba language during the interview, said his father died two months before he clocked the age of 70.

The two-term governor and former senator, however, succumbed to death today at the age of 70.

Watch the video below:

Ajimobi said: “I do tell God it’s enough once I clock the age of 70.

“My dad died with just two months to clock 70. So, I always say If I could make it to 70, then it’s enough. But when I was close and experiencing the goodness of life, I told God 70 is too small.”

Isiaka Abiola Ajimobi was born on the 16th of December 1949.

He was formerly the Managing Director/Chief Executive Officer of the National Oil and Chemical Marketing Company a subsidiary of Shell Petroleum, Nigeria.

He left the oil sector in 2002 after 26 years and was elected in 2003 as a Senator of the Republic of Nigeria representing Oyo South Senatorial District on the platform of the Alliance for Democracy (AD).

After one term in the senate, he contested in 2007 for the governorship of Oyo state under the banner of the All Nigeria People’s Party, a bid which he lost.

He recontested again in the April 2011 elections under the Action Congress of Nigeria and was elected Governor of Oyo State in a closely contested vote.