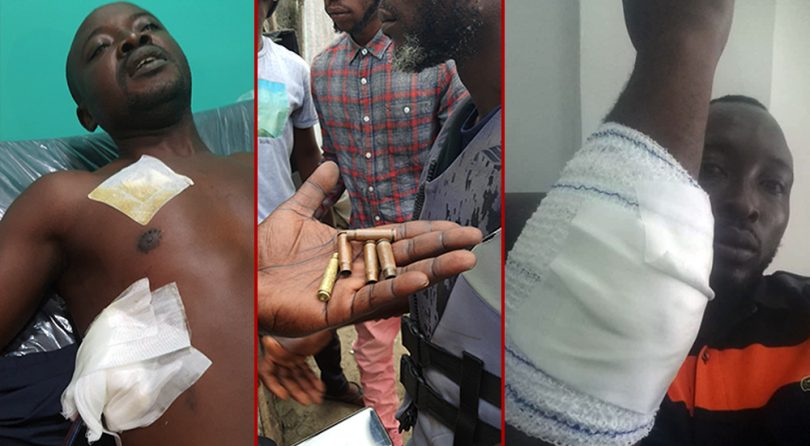 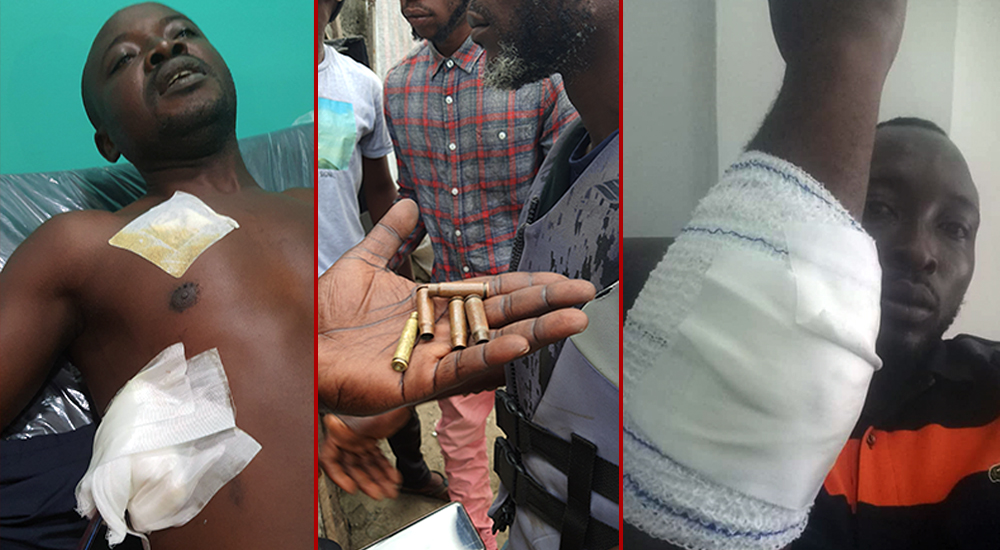 At about 6:45 p.m. on October 20, men in military uniform arrived at the Lekki Toll Gate in Lagos in three Toyota Hilux vans and immediately began shooting into a crowd of peaceful protesters gathered there waving the Nigerian green and white flag and reciting the national anthem.

Protesters and other witnesses at the toll gate claimed several people were injured and killed in the shooting.

She said the military initially prevented first responders and ambulances from reaching the injured but later allowed them through. She said she saw at least 15 corpses and claimed that security agents took the bodies away.

Several people who watched her Instagram live broadcast claimed that they saw protesters being fired upon by soldiers. They said some protesters died of bullet wounds while others while left with mild to critical injuries.

Similarly, a rights group, Amnesty International, claimed 10 people were killed during the shooting at the toll gate, and two others at the Alausa protest.

However, the Lagos State Governor, Babajide Sanwo-Olu, who described the shooting as a “dark note in the history of the state” and blamed the shooting on forces beyond the “direct control” of his government, originally said no life was lost in the shooting.

He later admitted that two persons died from the incident, one of them from blunt force trauma.

On Monday during an interview on CNN, Mr Sanwo-Olu continued to discredit the accounts of witnesses about the number of injuries and deaths from the shooting. He said no bloodstain was found at the scene of the shooting when he visited

“What has happened is that there have been so many footages that were seen, that people have shown, but we have not seen bodies,” he said. “We have not seen relatives, we have not seen anybody truly coming out to say I am a father or a mother to someone and I cannot find that person. Nobody has turned up. I have been to the ground, there is no scratch of blood anywhere there.”

Despite accounts by witnesses and video posted online, the Nigerian Army denied that its personnel fired upon protesters.

The army initially claimed its troops were not at Lekki that night, but later backracked and admitted that soldiers were deployed on the request of the Lagos State government. The army, however, insists that its personnel did not open fire on the protesters, let alone kill any.

The Lekki Shooting: Checking the facts

Piecing together details of on-the-ground reporting, credible information posted online by citizens, accounts by witnesses and victims as well as information obtained from top military sources, PREMIUM TIMES can now paint a clearer picture of what happened at the Lekki Toll Gate on October 20.

The newspaper’s investigative team set out to unravel what actually happened on the evening of the shooting and the hours that followed.

As this medium gathered evidence for this investigation, Sodiq Adeoye, an employee of research firm SBM Intelligence, informed one of our reporters after the shooting that some residents of Admiralty Way, Lekki Phase 1, a highbrow neighbourhood, about two kilometres from the Lekki Toll Gate, found a body floating in the lagoon just behind their houses.

Mr Adeoyo said the residents suspected the floating body could be one of the protesters fired upon by soldiers and alleged to have been carried away by witnesses.

On this newspaper’s request, Mr Adeoyo sent a brief time-stamped video of the corpse floating in the water. A Google map coordinate he sent indicated that the body was floating close to Bay Lounge, an upscale restaurant.

At around 6a.m on Saturday, accompanied by a friend, Deji Ashiru, this reporter drove to the Nigerian Army Post Exchange (NAPEX), Car Park Jetty in Victoria Island, where he and his team hired a boat to search for the body.

As the boat approached the bank of the lagoon, behind the imposing Oriental Hotel, the reporter saw a shanty ahead. The shanty is on the left side of the Lekki Toll Gate if one was travelling from Victoria Island. Due to its proximity to the toll gate, it immediately occurred to the reporter that residents of the community might have witnessed things that happened during the crackdown that was not yet in the public domain. His instinct was right.

He told the driver of the boat to stop his team at the shanty. It seems the residents had been waiting for someone to tell the stories of what they saw on the evening of the shooting because team members had hardly introduced themselves or even disembarked from the boat when they started recounting gruesome details about the evening.

The residents, some of whom suffered bullet wounds and other injuries, during the shooting, alleged that several people were killed and injured by the soldiers. They also corroborated the story told by DJ Switch and other protesters that after the shooting soldiers took the bodies of those killed away.

When asked if the protesters were killed and whether they saw soldiers carry bodies away, one of the resident said: “Of course, everyone saw it. Those that were present saw it.

“Even the one that died in our presence, wey be say the ekelabe (policemen) carry am go. They shot am there,” another resident said.

“Boss, if you want to camera, you can camera,” said the second speaker who later identified himself as Ray.

“Let me tell you something. This is my country. I am not afraid of anything. Let me say what I saw on that day. I was here from the beginning to the end of everything. What the soldiers and police did was absolutely wrong. Why would soldier come and shoot on us when we were having a peaceful protest,” he said.

When asked if he saw the soldier carry bodies away, Ray responded: “Of course, I saw dead bodies. They packed bodies. They came with their vans. Their trucks.”

Ray, who expressed his displeasure that President Muhammadu Buhari did not mention the Lekki shooting in his broadcast to the nation a couple of days ago, said Mr Sanwo-Olu visited the scene of the shooting in the early hours of Wednesday and saw some of the dead.

“Why is Sanwo-Olu denying? Because immediately after when that thing happened Sanwo-Olu himself came. He came. He parked at the toll gate. He saw some dead bodies on the ground. Why is he denying,” he asked.

Ray’s account of the event was also corroborated by other residents of the community.

The residents also alleged that after the soldiers who initially opened fire on the protesters left the scene, police officers led by Raji Ganiyu, a chief superintendent of the police, and the Divisional Police Officer of the nearby Maroko Division, arrived on the scene and continued the attack on defiant protesters who had stood their ground despite the military attack.

Showing us spent bullet casings they collected at the toll gate after the shooting, they accused the team led by Mr Ganiyu, whom they described as wearing a white native attire on the day, of shooting and killing some protesters, including a mentally ill man who was often seen around the area.

“DPO of Maroko we see am face to face wey e blow one person head pull the skull off. Pistol. E wear white and white,” one of them said in Pidgin.

“Na only one him kill?” another resident interjected in Pidgin. “What of the mad boy wey he shoot for our front here. Close range. There was a guy that was abnormal, he was sat at that speaker. He just came immediately, saw the boy, the boy didn’t do anything. He didn’t run, he didn’t harass him, he just removed his pistol and blew the boy’s head,” another resident said.

The Maroko Police Division is directly opposite the shanty and on the right of the toll gate.

When reached for comment, Mr Ganiyu declined to respond, saying all requests for comment should be directed to the Police Public Relation Department.

Also, the police public relation officer, Muyiwa Adejobi, said any question about the shooting incident at Lekki Toll Gate would be decided by the judicial panel of inquiry set up by the state government into alleged atrocities committed by the police.

The narratives of the residents of the event of Tuesday evening and Wednesday morning correlate with that of DJ Switch.

In a video posted on Instagram three days after the shooting, DJ Switch spoke about the involvement of the police and explained that it was one aspect of the shooting many were not talking about.

“Yes, there were soldiers there. Another part that people are not really talking about; the police also came. The SARS people we are talking about also came. Maybe 40-45 minutes after the soldiers left,” she said.

In one video footage, some protesters were seen tying a tourniquet to the badly bloodied leg of a victim with a belt. The unidentified man wriggled in pain. He had been shot in the leg.

In yet another video, a bloodied man laid lifeless, with the Nigerian flag on his hand as a man tried to revive him.

In another footage, an elderly man whose cloth was drenched in blood was seen lying beside another person who had suffered bullet wound injuries.

Footages posted on Twitter of the desolation at the toll gate the morning after the attack indicated a man showing a large patch of bloodstain on the scene of the shooting.

Watch the Video Below:

Protesters who survived the attack said lights, including streetlights and a large electronic billboard which illuminated the toll gate area, were turned off just before the attack to deliberately provide a cover for the brutal assault on peaceful protesters that were to follow.

The advertising company that owns the electronic billboard at the Lekki toll gate, however, said it deactivated its facility in compliance with the curfew declared by Governor Sanwo-Olu, unaware that tragedy would later struck at the location.